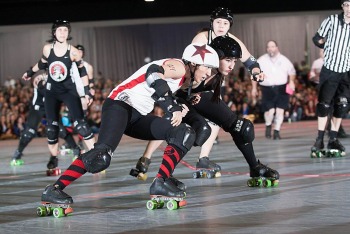 Much like the previous night’s game, Naptown was held scoreless for the first several jams as Gotham racked up the points, scoring 76 points. Naptown jammer Maiden America, after big points last night, broke the team’s ghastly goose-egg with a 5-point grand slam as Gotham jammer Suzy Hotrod went to the box for a major back block. The officials took the chance to clear up some penalty questions, as Naptown blocker Asian Sinsation was sent to the box for two minutes after accruing a major penalty, as well as an extra minute for insubordination, a failure to leave the track quickly enough.

With the halftime to recuperate for Naptown, the ladies did not come back to the track as they would have liked. Jammer Amuse Booche gave Gotham jammer Bonnie Thunders a power jam opportunity to score 25 points. The third and fourth jams, however, went to the ladies from Indianapolis as Gotham jammer Slamda Phage had two minutes in the box, as she accrued a major low block and then, after returning to the track, got another minute in the box for a major back block. Naptown jammers Blue Messiah and Amuse Booche grabbed 24 points to staunch the bleeding.

Naptown continued to skate away with points here and there, especially during the 12th and 13th jams when they scored 31 points on two more power jams from Slamda Phage, a real coup for the team, as they closed the point gap, and more than tripled their score from the break at half. Bonnie Thunders scored 172 points during the game, and Gotham took the win 316-111.