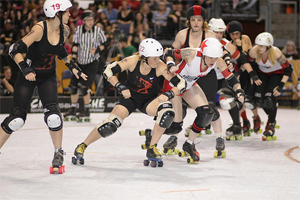 In a rematch from the championship bout at South Central Region Playoffs between Texas Rollergirls (SC #1) and Kansas City Roller Warriors (SC #2), the Texecutioners slogged out a hard-fought win in the match for third and fourth place at WFTDA 2011 Championships. While she had a knee injury during yesterday’s bout, the Roller Warrior’s jammer Track Rat sustained another injury during the first period and was out for the rest of the game. The feature of the consolation bout was defense; each team’s jammers had to work especially hard to get through the tight packs. In the end, Texas was able to get through KC’s pack more effectively. 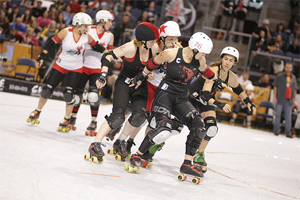 At one point, there was some confusion at the jammer line with Kansas City seasoned blocker Bruz-her, resulting in a fourth minor illegal procedure and a trip to the penalty box. After serving her time, Bruz-her made a rare appearance as jammer against the Texecutioner’s vet jammer Olivia Shootin’ John to finish the half with KC up 62-50. Kansas City’s jammer Kelley Young applied some fancy footwork to get through the pack, while Shortcut--new to the Championship track--made an impression on the scoreboard for Texas, as did Vicious Van GoGo with an epic apex jump in the fifteenth jam. Some mistakes from Kansas City late in the second period might have cost them the game, and a chance at third place. In the end, the results held true from the South Central Region Playoffs; the Texecutioners came out victorious with a final score of 136-112. Texas, which has made an appearance at every WFTDA Championship tournament, grabbed third place while Kansas City secured fourth after a weekend of play.

“The fun thing about the rivalry between Kansas City and Texas is that it’s never the same game between us,” Texecutioner and one of the few skaters to have skated in every Championship tournament since 2006, Lucille Brawl said. “As long as I can still do squats and bend my knees, I’ll play roller derby. It’s my favorite thing. Plus, I’ve been playing with Bloody Mary for so long, I think we’re just trying to see who can outlast the other.”

No matter who won the Championship bout, it would signify the first time in WFTDA history that there would be a repeat champion. In the end, it was 2008 Champions, Gotham Girls Roller Derby (E #1) who would win the honor of holding the title of 2011 WFTDA Champions after defeating 2009 Champs, Oly Rollers (W #1) in the final bout of the Continental Divide and Conquer. The first period of the game saw each team chipping away at the other for point prowess on the scoreboard. Gotham jammer Wild Cherri scored 19 points in the eighth jam to start the ball rolling for Gotham’s ride to the winner’s circle. The jam represented a pack drought for Oly; in fact, between jams eight and 22, Oly was not able to field a full pack due to multiple majors accrued by their skaters. 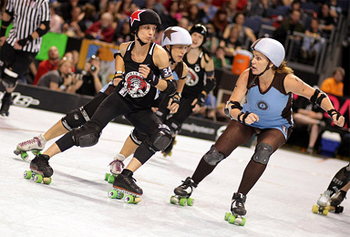 The score at halftime had Gotham up 59-38. Penalties continued to be a problem for Oly, who ended up losing three skaters for too many trips to the box during the game: Tannibal Lector during the thirteenth jam, Sassy during the eighteenth, and Hockey Honey during the final jam of the game. Of note, the jammer switch out during the sixteenth jam between Gotham’s Suzy Hotrod and Oly’s Stella Italiana, left Gotham with the edge, grabbing two power jams as Stella went to the box a second time for a fourth minor. As the clock wound down, Oly’s pack thinned out and Gotham’s jammers sliced through with agility and acuity. The Gotham Girls Roller Derby take home the Hydra, with a final score of 140-97.

“This has been the most amazing experience," said Gotham's Wild Cherri, who transferred to the team from Tampa Bay Derby Darlins this year. "It’s been such a pleasure working with such a great group of women and with such a well-oiled machine. It’s so amazing. Each time I step on the track I nearly cry because this has been so wonderful, and I’m so happy to be here.” 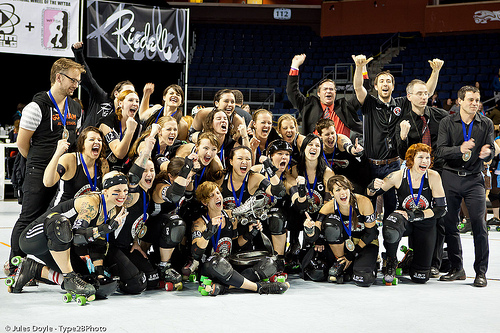