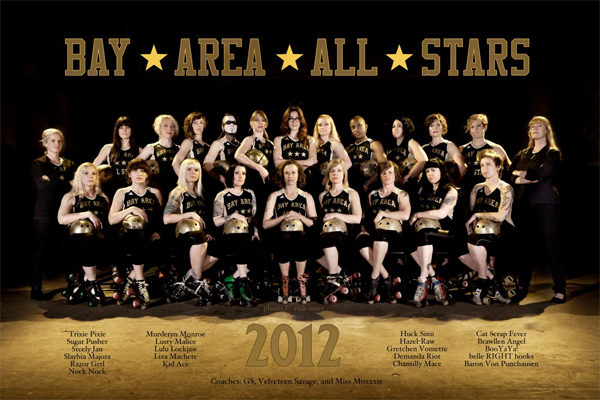 Based in: San Francisco, California

Have you had any notable roster changes since your last Playoffs appearance?
Most recently, our team lost longtime vets Taxi Scab, Velveteen Savage, Sassy Slayher, Astronaughty, Aunti Christ, and Friskie Meow after the 2011 season. Thankfully, we were thrilled to add some incredible transfers to our ranks in 2012: Lulu Lockjaw from Santa Cruz Derby Girls, Steely Jan from the San Diego Derby Dolls, Kid Ace from Providence Roller Derby, Shannon Dorato from Denver Roller Dolls and Kristi Yamagotcha from the Angel City Derby Girls.

What's one super special thing about your league that makes skaters want to stay?
We are very team-centric. We really like each other a lot! We take care of each other on and off the track. We push each other to be the best we can be, whether that is at the gym, at practice, during games, or at the after party.

What's your crowd like at home?
Our home crowd is INSANE. We love them! We sold out several bouts this season and our home team championship game was deafening. When our All Stars hosted the Kansas City Roller Warriors, it seemed the Craneway Pavilion was going to explode from the excitement! If you have any doubts about fans of the Black and Gold...well, we're pretty sure you will meet many of them this weekend at Westerns.

What are some game highlights from the All Stars’ season?
Playing Rat City Rollergirls in front of their home crowd at the Key Arena is always a treat. And we had so much fun traveling to Austin to play (#1 East) Gotham Girls Roller Derby, (#1 South Central) Texas Rollergirls, and (#1 North Central) Windy City Rollers at the Star of Texas Bowl [this summer].

Who's your biggest rival?
We have quite a history with the Rose City Rollers and the Denver Roller Dolls, and are proud to count such hard-working teams as our contemporaries as well as adversaries. They are incredibly worthy opponents.