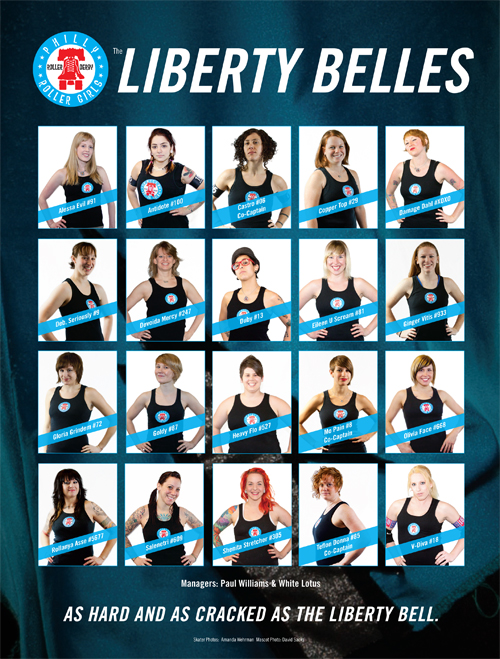 Based In: Philadelphia, Pennsylvania

How many WFTDA region playoffs have you participated in?
Philly has participated in every region playoff since WFTDA created them in 2007. Some highlights include winning 3rd at the 2008 (then-called) Nationals in an East sweep (when Chicago [Windy City Rollers] was considered East!) and our notorious 1-point win over Gotham Girls Roller Derby at the East Region Playoffs in 2009. Hosting the 2009 Championship tournament in downtown Philadelphia was also extremely memorable! We have a handful of players who have skated in all WFTDA playoff tournaments; these include long-time veterans Mo Pain, Castro (formerly Violet Temper), Teflon Donna, Shenita Stretcher, Persephone, and Wendy Whiplash.

Who should we watch out for on the track during your appearance at the 2012 Playoffs, and why?
You can't miss V-Diva--she's over 6 feet tall, with an amazing strong stride and unstoppable jamming prowess. Blocking powerhouses Olivia Face, Heavy Flo, and Shenita Stretcher are also incapable of being missed. This said, the entire Philly bench comes together with such cohesion, strategy, and skill that makes the whole team a stand-out!

Who's the Liberty Belles’ biggest rival?
Gotham, obviously--they are the team to beat! We hope to meet them in the final championship game!

What does your league think that the teams in the East Region are well known for?
Teams from the East are known for innovative, strategic derby. Since the East also includes international teams like Montreal, London, Auld Reekie, Bear City (Berlin), Crime City (Sweden), Glasgow, Linconshire (UK), Rideau Valley (Ottawa), and Windsor, we are arguably the most diverse as well!

What's one super special thing about the Philly Roller Girls that makes skaters stay with your league?
Philly has a lot of heart and while we work hard, we also keep things fun. We also remain completely skater-coached so it's always a collaborative environment. We built this league together, we run it together, we win and lose together. We like to come in as the underdogs and surprise people!