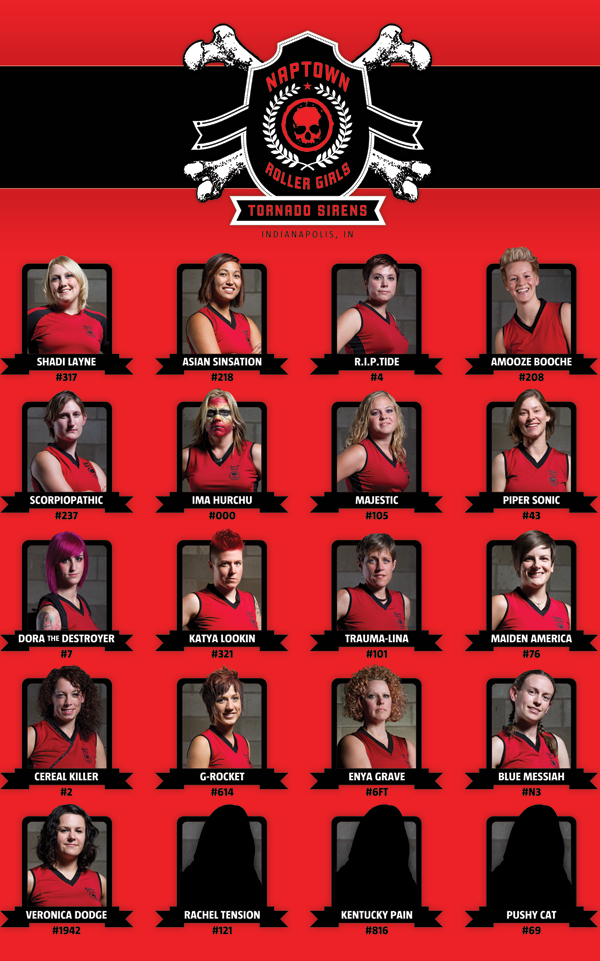 Based In: Indianapolis, Indiana

Have there been any notable roster changes since your last Playoffs appearance?
We have SEVEN charter changes since Playoffs last season. Blockers Ana Slays Ya, Eve Elle and Willa Hoeflinch are active retired this season. We also had two players retire and two drop down to pick up some more skills on our B team. We’ve had four players move up the ranks to the charter and, since Playoffs, we’ve had four more former members of the Fort Wayne Derby Girls transfer downstate to play with us. You’ll see three of them on the charter for playoffs. (Of course, you saw three last year at Champs as well.)

Who should we watch out for on the track during your appearance at the 2012 Playoffs and why?
G-Rocket is one of our newest jammers – she rose through the ranks of the league very quickly. Also, again, watch out for the triple threat of Dora the Destroyer – she jams, blocks, and pivots with a determination and strength that is rarely matched.

Do you have any memorable experiences from your past Playoffs trips that you want to share?
Last fall, NRG was the host for “Monumental Mayhem,” the North Central tournament. It was a wonderful weekend of competitive, fast-paced derby action. We were proud to be the hosts and welcome the top 10 teams in the region to the “Circle City.” Obviously, the most memorable moment for us was the closing moments of our Sunday bout against Detroit that landed us in third place at the tournament and sent us to the WFTDA Championships for the first time.

What are some game highlights from your 2012 season?
Our recent 3-point win over Kansas City felt pretty good. We also had two great trips this past season – one to the East Coast and one to the Pacific North Coast.

What's one little known fact about your league?
Our first practices were in a church parking lot.