The first bout of Continental Divide and Conquer started as a would-be shut-out with the Minnesota RollerGirls (North Central Region #2 seed) up 29-0 in the first few minutes of the game against Charm City Roller Girls (East Region #3). 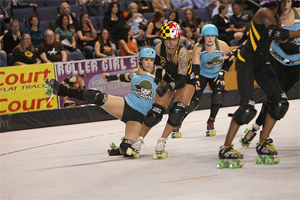 However, despite penalty trouble for Charm, the girls from Baltimore were able to claw their way out of the basement, ending the half 94-42 Minnesota. The second half was a different story for Charm; they had several power jams and were able to close the gap to 107-105, Minnesota. Harmony Killabruise, jammer for Minnesota, held Charm's tournament hopes in her hands in the last jam. The ladies in turquoise and army green take the win, with a final score of Minnesota 160 to Charm City's 121.

"We knew going in to the game that we'd have to have some kind of relaxation point to come back to if we got into penalty trouble," Psycho Novia, captain for Minnesota, said." When Charm City came back in the second half, we called a timeout to go back to our relaxation point. Charm came out hitting hard, but we kept our heads." 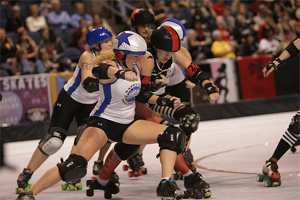 Nashville Rollergirls (South Central Region #3) were able to draw first blood against Rocky Mountain Rollergirls (West Region #2) in the second bout of the day, scoring four points in the second jam. The ladies from Denver, supported by the large hometown crowd, came back strong in the first half, keeping Nashville from gaining any momentum. The score at halftime was 101-41, Rocky Mountain. The penalty boxes for both teams in the second half were frequently full, but Rocky was able to continue its tirade, dominating the Nashville jammers in the pack. Nashville jammer and captain Rambo Sambo called a time out with three minutes left, rallying her team to a strong finish, noting in the huddle that it was their team's intent to play the "smartest, cleanest, tightest game we've got." The rally wasn't enough for Nashville, the deficit was too great, and Rocky Mountain wins 198-58. 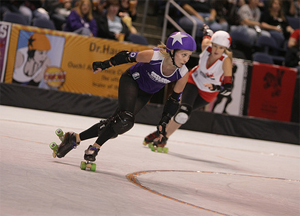 The closest game of the day saw a battle of the cities: Kansas City Roller Warriors (South Central Region #2) versus the Rose City Rollers (West Region #3) from Portland, Ore. A supremely physical game, Bout 3 was the first of the day that had the blockers starting at the pivot line rather than the jammer line. And while the previous teams lined up closely to the jammer line for tight play, KCRW and Rose had play that was just as tight. The game was neck-and-neck for the first several jams, but Kansas City was able to widen the gap in what was a solid run for the Warriors, the team scoring more than 25 points in fewer than five minutes. Kasnas City took advantage of Rose City's high penalties, but the ladies in purple were able to eek out an edge by the half, 62-58. Rose City's penalty troubles continued into the second half, and Hurricane Skatrina, Rose City blocker, was ejected in the second half for accumulating seven majors. The score went back and forth repeatedly, keeping the viewers in the stands on the edges of their seats. In the end, Kansas City's clean skating proved most triumphant, after defeating Rose City in a real barn-burner of a bout, 139-128. This is the first time in their last three Championship tournament appearances that Kansas City has advanced to the second day of play. 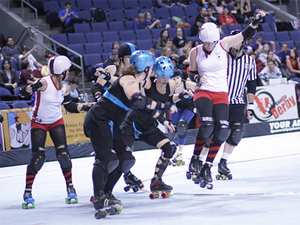 The Philadelphia Roller Girls' Liberty Belles (East #2) dominated the Naptown Roller Girls' Tornado Sirens (North Central #3) from the first whistle of Bout 4, the last of the day. The strong pack from Philly kept the Naptown jammers from successfully gaining lead jammer status, while the jammers in black and blue worked grand slams to the extreme. Philly ended the first half with 104 to Naptown's 20. The strong defense from the Liberty Belles kept Naptown at bay during the second half as well, continuing to dominate the track and the scoreboard. Philly was the first of the tournament to break the 200 point mark, while Naptown was able to do more than double their score from the first half. The bout ended with Philly 225, Naptown 68.

Come back to wftda.com for Day 2 action!

Next Post: The Derby Deeds Champs Wrap 2011 Championships - DAY ONE