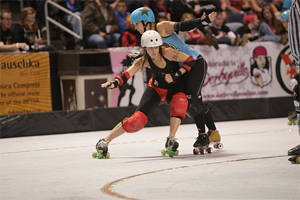 The first bout of 2011 Championships, Day 2 started off with frenetic energy, not just at the arena, but on the benches as Texas Rollergirls (SC #1) took on and defeated Minnesota RollerGirls (NC #2). The first half of the bout saw Minnesota jammers coming through the Texecutioner pack like Land 'O Lakes butter; they made it look easy. However, as the period advanced, Minnesota ran into penalty trouble, and Texas blocker Barbara Ambush did some phenomenal blocking at the front of the pack. And the Texas blocking was enough to start hacking away at the gap in the score. The score at half time was 56-67, advantage Minnesota. Texas came out swinging in the second half, with tighter team work and the ability to gain lead jammer status far more frequently than in the first period. While the Texecutioners were able to turn their game around, Minnesota let up on their strong jamming from their first period. Vicious Van GoGo had a 15-point jam to blow the doors open on the scoreboard. Her ability to trust her defensive blockers let Vicious neutralize Minnesota jammer JukeBoxx. The Texecutioners advanced to play Gotham Girls Roller Derby after defeating the ladies from Minnesota, 141-108.

"The great thing about Texas is that we're not a one-trick team," Texas jammer Bloody Mary said. "We've got a Plan A, B, and C. We play one game at a time, and that's what's work for us; it's gotten us into the semi-finals here. We've got real commitment to oursleves and our team." 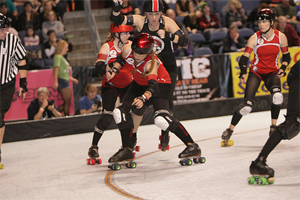 Perhaps the most anticipated bout of the day, Gotham Girls Roller Derby (E #1) took on hometown favorites Rocky Mountain Rollergirls (W #2) in the second bout of Continental Divide and Conquer. The 1st Bank Center was full of fans, and the excitement was palpable. The pack play was tight, tighter than an A-Train subway car in rush hour. In most jams, it took nearly 40 seconds to release the jammer. Gotham jammer Suzy Hotrod had a 29-point jam in the sixth jam, a clear indicator of the score at halftime. Gotham was on top going into the second half, 75-53. Rocky, however, was able to hold Gotham to one point in the first four jams of the second period, but four major penalties in a row for Rocky jammer Urrk'n Jerk'n as Booty Blockya sealed the fate for the 2010 defending WFTDA Champions. Losses to the Rocky bench for excessive penalties from Urrk'n, Psycho Babble, and Amanda Jamitinya didn't help either. Gotham's patience and mental focus advanced them to the semi-finals later in the day, with a final score of 187-139. 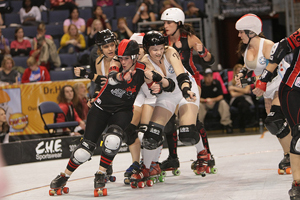 Kansas City Roller Warriors (SC #2) provided the tournament with its first upset of the weekend, defeating the #1 North Central Seed, Windy City Rollers (NC #1) in the third game of the day. While the teams shared a nearly equal exchange of penalties and lead jammer status, Kansas City was able to establish a clear lead in the first half, 42-29. Windy City started the second half with momentum, but losses for excessive majors to the Windy bench late in the second made a comeback difficult for the team to achieve. Skaters Jackie Daniels and Tori Adore accrued too many majors and were asked to leave the track. Kansas City didn't escape the grim fate of ejections either, losing blocker Annie Maul near the game's conclusion, but still came out victorioous, 112-95. 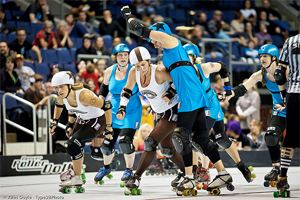 The back and forth play in Bout 8 between the Oly Rollers (W #1) and the Philly Roller Girls (E #2) lasted for the first several minutes of the game, but Philly's grip on the game began to loosen as the period progressed. The score at half had Oly ahead 89-36. The Liberty Belles were in penalty trouble at the start of the second half, but the team was able to regroup and pull off four lead jammers in a row, and in the last 14 minutes of the game, Oly was only able to grab three lead jammers. Philly capitalized on the lead jammer advantage, and Teflon Donna, captain for the Liberty Belles, could be heard yelling that the team "just wants to play roller derby" before the last jam. She grabbed lead jammer, but Philly lost its chance at Champs when Oly defeated them, 181-95.

The first of the semi-final bouts began after a dinner break, and the crowd came back charged to watch Gotham Girls Roller Derby (E #1) take on Texas Rollergirls (SC #1). There were tight packs and strong walls between both teams from the first whistle, but Gotham was able to edge out the Texecutioners after a seemingly tight first few minutes. Gotham kept Texas scoreless for eight jams, and while Texas jammer Olivia Shootin' John was able to grab 18 points in a power jam after Wild Cherri got sent to the box for a major track cut, it wasn't enough to grab a lead, and Gotham had the lead at halftime, 75-48. The penalty box filled up during the second half for both teams, and the loss of Sarah Hipel for Texas for excessive majors made a win for the Texecutioners unlikely. Gotham triumphed and advances to the Championship bout on Sunday with a win over Texas, 195-113.

"Everything we do as a team we do with focus," Gotham captain Donna Matrix said. "I'm not sure we ever really felt like we necessarily had the advantage, we just did what we did with focus. Our team showed up seven to eight days before the tournament,which wasn't necessarily an advantage. We just wanted to do everything we could to prepare for this weekend. We can't wait for tomorrow." The final bout of the day between the Oly Rollers (W #1) and the Kansas City Roller Warriors (SC #2) started out as a foregone conclusion. The 2009 WFTDA Champs grabbed the lead early and kept Kansas City at bay for the first half. The Roller Warriors fought valiantly, but it wasn't enough in the first half; the score for the Cosa Nostra Donnas was nearly double that of the Warriors at halftime: 62-36. The second half, however, was a different game altogether for the ladies from South Central. A 25-point power jam from Kansas City jammer Kelly Young bumped the Warriors up 87-67 in the second half, as Atomatrix took two trips to the penalty box. Oly answered a few jams later, and knocked on the century mark with nearly ten minutes left in the game. From then on it was a true seesaw between the teams. Oly's blocker Hockey Honey was ejected with two minutes left in the game. A jammer switch out in the last jam of the bout kept either team from calling it off, giving Oly the opportunity to maintain its lead and punch its ticket to the Championship bout. During the last jam, Kansas City's blocker Evolution was ejected from the bout, as was Oly's blocker/jammer Tannibal Lector for accruing seven majors. With a final score of 124-104, Oly advances to play Gotham in the Championship bout, and Kansas City will face off against Texas, a re-match from South Central Playoffs.

Come back to wftda.com on Day 3 to see who will be the WFTDA 2011 Champion!