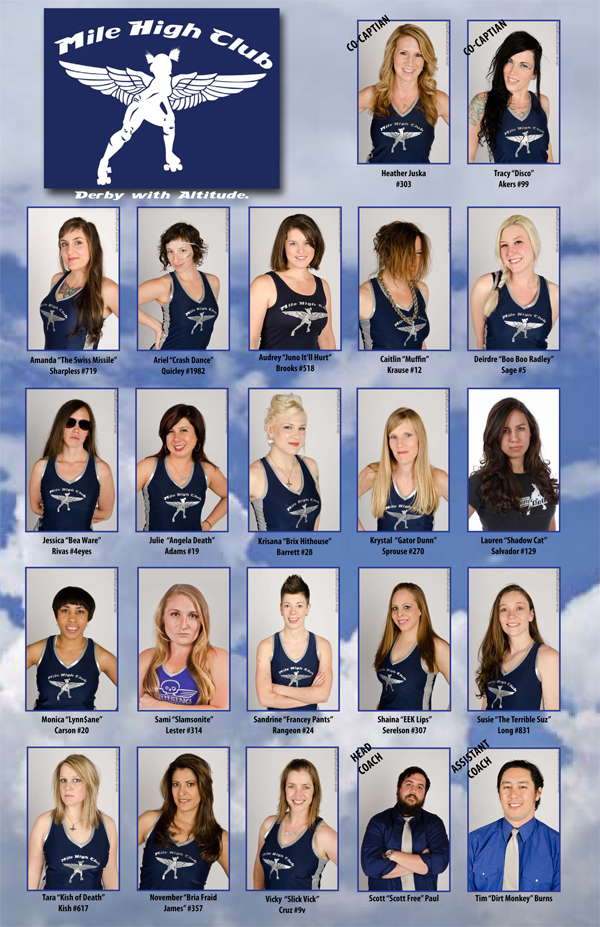 Based in: Denver, Colorado

What does Denver think that the teams in the region well known for?
Teams in the Western Region are known for being incredibly competitive. Literally anyone in the top 6 has a legitimate shot to make it to Championships.

What's one super special thing about your league that makes skaters stay with your league?
According to recent transfers, skaters are genuinely impressed with the emphasis on improving individual skaters through on-track practices and off-track conditioning as well as encouraging participation in league operations and philanthropy. Our league attendance and participation are rigorous but foster extremely high levels of league pride in an area with many other league options.

What are some game highlights from your 2012 season?
An early season victory over B.A.D. that set the tone for changes in the Western Region rankings, followed by a close loss to Rose City and close victory over Rocky Mountain. A split at ECDX (loss to Gotham, win over Philly) and then two big wins at Rollercon over Rose City and MNRG to build up to the regional tournament. Denver has played the current top 2 in the NC Region, top 2 in the East Region, no. 2 in the SC Region, and nos. 1, 3 and 5 in the West Region this season.

Do you have any memorable experiences from your past trips that you want to share?
2012 will mark the fifth straight year Denver has made the Regional tournament. The most memorable, of course, is the 2009 semifinal with Rocky Mountain that ended with the controversial last jam with spectators rushing the track before the jam clock ended.?

Have there been any notable roster changes since your last Playoffs appearance?
Our team is pretty much intact from the 2011 Western Regional in terms of key players, some notable exceptions are the retirements of 2011 co-captain Gaby Begeman, Danica Dolezal and Teresa Rusk.