The first semifinal game of the tournament brought the Oly Rollers (West #1) against the Texas Rollergirls (South Central #1) for both teams’ second bout of the day. After beating the odds to come back against Bay Area earlier in the day, all eyes were on Texas to see if they could make magic happen twice. 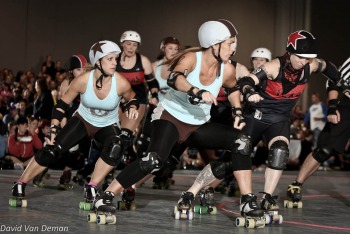 Olympia started out strong with an early power jam and held Texas at only 3 points for 8 jams. Texas’ jammers couldn’t stay out of the box for any amount of time. Jammers were coming out of the box, then going right back in for another offense. Things were looking pretty dismal for Texas until a power jam by Olivia Shootin’ John finally got them into the double digits. Oly still dominated the first half with a score of 141-54.

Watching Tannibal Lector, one would never know that she gave birth 20 days ago. Paired with Hockey Honey, their blocking was flawless. Oly’s jammers were unstoppable, and even after a jam was called for On Da Sligh’s injury, she was back after the requisite 3 jams out.

The second half showed little change. Texas got their penalties under control, but even their expert jamming paired with serious blocking by Polly Gone and Bloody Mary couldn’t stop the bleeding. Despite a strong Texas four-wall, Oly’s jammers continued to blast through and rack up points. Two late power jams by Texas’ Smarty Pants and Olivia Shootin’ John elicited roars from the fans, but it wasn’t enough. Oly came out on top with a score of 224-147.

Oly will play either Gotham Girls Roller Derby or Denver Roller Dolls in the final battle for the Hydra at 3 p.m. EDT Sunday.