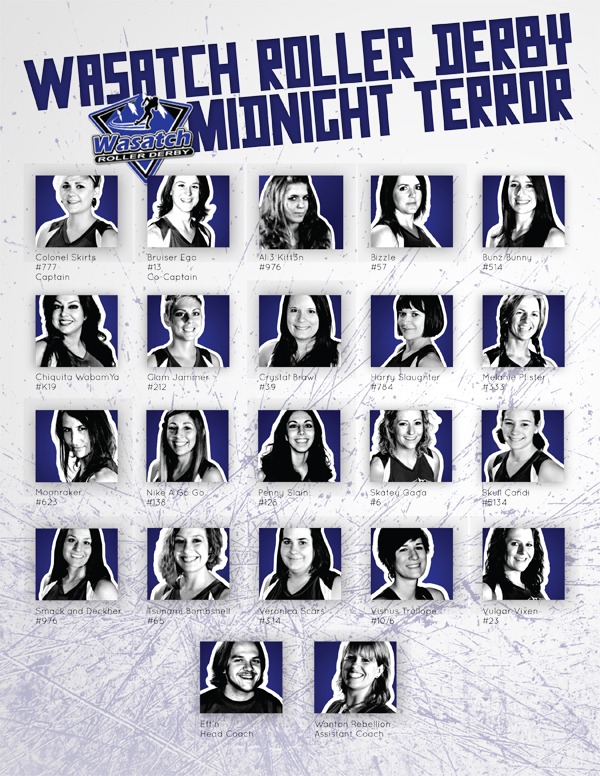 Based In: Salt Lake City, Utah

Does your league have a motto, or words that it lives by?
Our travel team motto is "Reset! Relentless! One Team! WRD!" Midnight Terror's goal is to tackle every jam uniquely. Our focus is to always move forward and reset from jam to jam, playing relentless in every position on the track. Resetting and playing relentlessly are reminders that we play united as "one team", not as individual skaters for our team and on behalf of our league.

Has your league experienced any retirements, transfers or injuries in the past year that have made a substantial difference in your league’s play and performance?
Wasatch's goal is to build a diverse, dynamic team that is not dependent on any one individual player or players. This has been a rebuilding year for our travel team as we have experienced all three of these situations. Alie Kitten left the league last fall to focus on other things, but continued to skate for her roller hockey league and has just recently rejoined the league. She was a key jammer last year at the playoff tournament, so adjustments to the jammer rotations have changed as we have worked to develop other jammers this season. Squid Vicious, another jammer and a former Rosé City player moved to New York this spring. The Instigator, a fierce blocker stepped down from the travel team earlier this season due to a busy work schedule and Smack and DeckHer returned to the team for her first bout against Rosé City in April after having knee surgery last November. All of these situations allow us to look at the strengths and weakness of the team without these players and fill those gaps.

What was the turning point for your league to make it to a playoff this season?
The turning point for Wasatch Roller Derby to make it to a playoff this season was not about one big game, but our ability as a team to show that we can play against different teams within our division and win. Defeating Sacred at the Big O this year was a successful and exciting win for our team. Regardless of wins or losses, Midnight Terror works hard to learn and grow as a team from each bout experience.