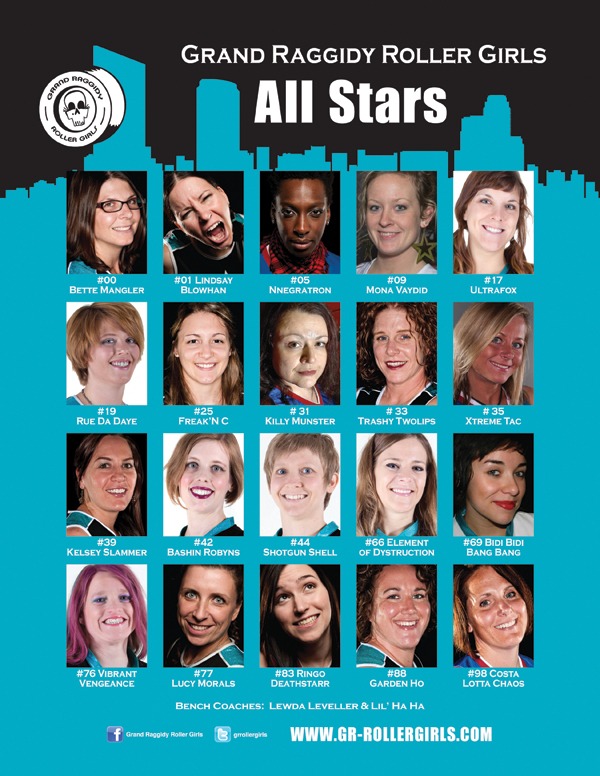 Based In: Grand Rapids, Michigan, USA

What are some game highlights from your travel team season this year?
Showing the derby community who WE ARE by our successes at BrewHaHa – We were predicted to have one of the worst point differentials of the tournament according to an online roller derby blog. This prediction was likely brought on by the struggle of us losing our bouting venue to flooding in the Spring. We bounced around from venue to venue and went through a financial hardship. By enduring this and receiving financial and emotional support from some of our favorite sister leagues we were brought closer together as a team. As a result, we did better than anyone expected at BrewHaHa, which amped us up for more. Achieving such neck-in-neck bouts with Cincinnati and Madison made us realize we deserve to be a Division 1 team.

Who is the newest skater to your travel team? Your most veteran skater? For how long have they been skating with your team? What newness or “aged experience” do these skaters add to your team?
Bette Mangler and Lindsay Blowhan both started the same week eight years ago. The league had just started and teams had not even formed yet. Only a select few skaters had skate names. Both of these skaters bring a wealth of information to the league. They know what works and what does not. They have deep roots with other teams and players that they have skated against most of their career. These connections prove to be a great asset to the league for networking.

Rue DeDaye is our most recent addition to the charter. She played with the travel team a while back and then moved to Illinois. She just recently moved back to Grand Rapids and transferred back to our league. After that, Bidi Bidi Bang Bang and Nnegratron are the next most recent additions. All of three of these skaters bring a new energy and determination. Their drive has sparked a refreshed drive and go get ‘em attitude in some of our veteran skaters.

How have your practices changed since being named one of the teams to make it to the 2013 Playoffs?
We have changed the focus of practices to the needs and betterment of all charter skaters. In addition, we have added weekly charter practices as a supplement to our regular three weekly practices. We acquired a strength trainer who trains the charter team members two to three days a week at his gym and provides off skate conditioning once a week at practice.