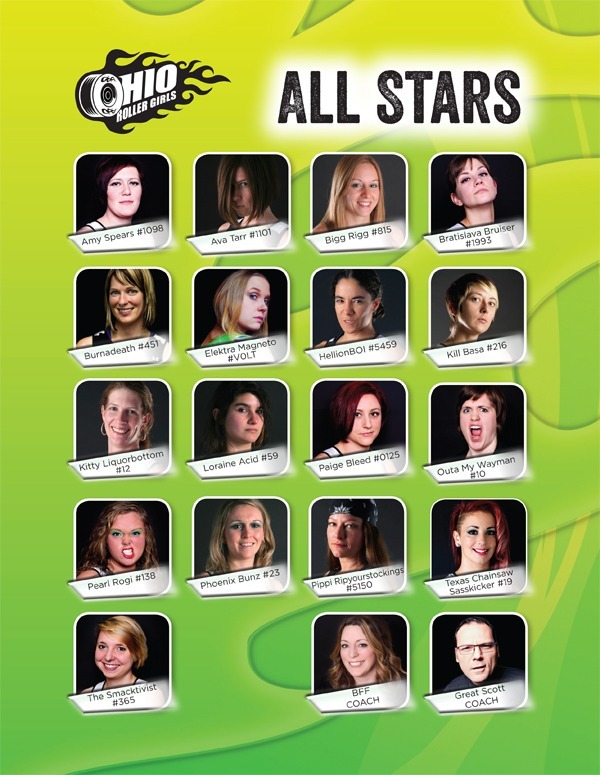 Based In: Columbus, Ohio

What was the turning point for your league to make it to a playoff this season?
We've been climbing pretty steadily over the past few years, so there wasn't really one turning point this year. However, we're especially proud of our early season wins over Steel City and Tampa, our strong showing in Toronto at Quad City Chaos, and our narrow losses against Atlanta and Philly, who are both ranked well above us.

Have you ever played any of the teams in your Playoff bracket? What was the outcome?
Ironically, doing away with regions didn't keep us away from our longtime rivals and friends the Arch Rival Rollergirls. We faced them last year in the exact same game in the bracket. We beat them by 10 points last year, on our way to our best playoffs finish to date, at 4th place.

Grand Raggidy, Cincinnati, and Bleeding Heartland are all teams we've played about once a season historically and they're fairly close geographically, so we know them well as teams. We played Montreal in one of the first international games ever at ECDX in 2009. We beat them by 4 points with a roster of 11 players (but that was ancient history, relatively speaking).

We're really excited about potential international matchups with either Montreal or London, and we've never played Denver, Rose City or Wasatch, so the potential of any of those games is exciting. But right now, we're just concentrating on getting past Arch Rival.

Has your league experienced any retirements, transfers or injuries in the past year that have made a substantial difference in your league’s play and performance?
We actually had no retirements from our core roster at the end of last season, and our basic roster is the same, with a few notable changes:

Burnadeath transferred in from Emerald City, the league she helped start, at the end of last season, right before playoffs. She had been off skates as a coach a few seasons, but she's picked it back up again and turned into a stellar teammate.

Outa My Wayman was on a leave of absence last year, so didn't get to skate in playoffs, but this year she is back with a vengeance, and has been both blocking and jamming.

Elektra Volt joined us late last year, transferring from NEO Roller Derby in Akron. She spent the first half of the year as Gang Green's captain, and also as a swinger, playing with the charter team.

Pearl Rogi is a skater who has worked herself up from NSO, to B team skater, to swinger over the past few years, and she is now seeing some play time with the charter team.