Despite incredibly tough defenses and slow walls, it was penalties that won the game for Windy City Rollers of the Minnesota RollerGirls in game 16. Windy City’s strong defense forced a critical track cut on the last jam of the game and they held on to win 160-154 over Minnesota.

Thirty-three seconds in, Ying O’fire of Windy City finally fought free of a suffocating Minnesota defense. Harmony Killerbruise broke free from an even tougher Windy City Defense one minute later, forcing Ying to call it at 6-0 for Windy. Two jams later, Jackie Daniels was stuffed by the Minnesota defense and Second Hand Smoke scored 12 points for a Minnesota lead. Minnesota had a slight edge at 8-12, with 25:46 left in the first half. But Ying, once again, scored points against Harmony Killerbruise and created another lead change at 18-12, 24:25 left in the first half. Then Slambda Phage was able to score 4 points, to pull Minnesota within 2. 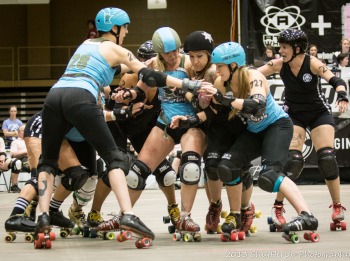 The first power jam of the game was claimed by Jackie Daniels as Second Hand Smoke was called on a forearm penalty. Jackie Daniels managed to score 15 points, taking the lead for Windy up to 33-16, with 21:35 left in the first. Before the power jam came to a close, Killa Nois was also able to add points for Windy.

Harmony Killerbruise picked up 2 points for Minnesota, but couldn’t get any more. Following a couple of scoreless jams, the score remained 40-18, Windy City in the lead with 17:10 left in the game.

Killa Nois lined up against Harmony Killerbruise at the start of the next jam. Harmony tried to hit Killa Nois out at the start whistle and was sent to the box for direction of gameplay. Killa then picked up a few and called it. But on the very next jam, the Minnesota defense stifled Ying and Ying was called for a forearm, releasing Harmony. The Windy City defense made it tough on Harmony and she had to work hard for each point. The score after the power jam swap was 51-28, Windy City had the lead with 13:44 left in the period.

After hard-hitting defenses made both jammers work for a few points each, Minnesota began to pick up steam. Second Hand Smoke increased Minnesota’s points to 30. Fannie Tanner then put up 5 and called it. Slambda snuck around on the outside for more points and pushed the score to 54-50 with 7:20 left in the half. Second Hand Smoke took the lead for Minnesota at 54-58 with 6:24 left in the first half.

Ying then put up 3 points to bring Windy’s total to 57. Minnesota held tight to a 1-point lead. But Minnesota’s jammers won out the next few jams and put 14 more points on the board. Windy’s Varla Vendetta fought for a few points of her own, making it 60-72—Minnesota still lead with under a minute to go in the first half. Killa put 4 more points up for Windy before halftime at 64-72.

Minnesota grabbed the first five lead jams of the second half and were able to build their lead to 67-78. Windy City caught a break when Second Hand Smoke came around for points and was called for a back block. Ying O’fire brought the score 77-78, but was called for an out of play call after she tried to call it off, wasn’t lead and kept skating. Second Hand Smoke busted out of the box and scored more points for Minnesota. The jam ended with Ying in the box and 81-83 on the scoreboard, and Minnesota hanging on to their lead by two points.

The score at 91-101 with 20:43 on the clock, Slambda Phage cut the track before she could call off the jam. Athena DeCrime then started the power jam for Windy City, but was also called for a back block when she came around too fast for points.

Both jammers were out of the box and both teams upped the intensity and delivered some big blows. However, Windy City experienced penalty trouble and Minnesota stretched their lead 94-130, 15:25 left.

Ying O’fire fought her way to increase the score to 122 for Windy City when Slambda Phage was called for a penalty. Just as soon as Slambda was released, she was called back to the penalty box on a back block call. Jackie Daniels, who had secured lead with Slambda in the box, called the jam with the score 132-133, and 11:04 left in the game.

Both teams saw their jammers take a turn in the box. Varla Vendetta was called for a forearm penalty right as Slambda Phage got a blocking with the head call. Varla came out of the box and scored points for Windy City. The scoreboard read 141-136, Windy on top with 8:35 left in the game.

With less than 7 minutes left, Jackie Daniels was called on a track cut. A battered Harmony Killerbriuse passed the star to Juke Boxx and Juke Boxx fought for points for the remainder of the jam. However, Windy still held on to a 150-143 lead.

Varla Vendetta was called on direction of gameplay when she tried to hit Second Hand Smoke off of the starting line. Second Hand Smoke scored points but was called for a back block on a subsequent scoring pass. At the jam's end, Windy City still held on to a 160-150 lead with 2:31 left in the game.

Slambda Phage helped pull Minnesota closer by securing lead jammer and four points for 160-154 and under 1:29 left. With one final jam, Minnesota placed veteran jammer Second Hand Smoke on the jammer line. Windy City chose Varla Vendetta. Windy City’s defense forced Second Hand Smoke to cut the track. Varla exited the pack and slowed down. She waited until the period clock read zero and called off the jam. The game ended with Windy City pulling out the victory, 160-154.

“The last five minutes, we were up and in a good spot. The jammers did their job, the blockers did their job and we forced it on Minnesota to change the outcome of the game," said Windy City Captain, Bork Bork Bork.

Windy City will take home 3rd place and secured a trip to Championships. Minnesota will go home with 4th place.