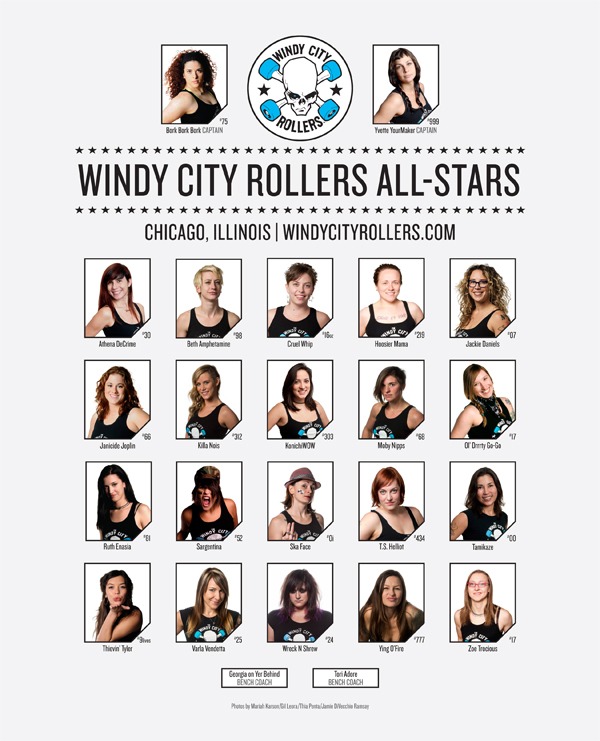 Based In: Chicago, Illinois, United States

What are some game highlights from your travel team season this year?
We were invited to London this year to play and coach in April. It was a monster of logistical planning and we all dug deep to make it happen. It is a momentous element in the history of roller derby that the sport is international, and we are all proud to be a part of that.

Sweeping the Golden Bowl tournament against such tough teams has been the high point so far this season. We are now ready to keep climbing up the mountain, and the next step is getting to the championships!

Has your league experienced any retirements, transfers or injuries in the past year that have made a substantial difference in your league’s play and performance?
We are grateful to have a few transfers in these past 12 months!

Late last season, Moby Nipps transferred from Brew City Bruisers in Milwaukee.She has an upbeat attitude, killer drive, and precise blocking. She has become a great asset for us!

Killa Nois transferred last summer from Angel City. She is new to the WCR All-Stars this year and has been an excellent and consistent jammer for the team. She is a smart player and never gives up.

Jackie Daniels was sidelined due to some injuries, but she is extremely driven so we expect her return to be smooth and that she will be stronger than ever, but we have missed her on the track!

What was the turning point for your league to make it to a playoff this season? Was there a BIG WIN that pushed your team over the edge?
One of the WCR's goals is to build the whole league from bottom to top. Within that structure, teams build on the success of the prior years. Last year's All-Star team worked really hard, and one result was that this year it positioned us to have a great shot at making playoffs. We continued to sharpen the team's skills and finesse our game and are excited to be playing this year's playoffs!