Gotham Girls Roller Derby took home first place over Rocky Mountain Rollergirls in a tough, hard-fought battle for the last game of the 2103 WFTDA D1 Playoffs in Asheville, North Carolina. Rocky Mountain fought until the very end, even picking up lead jammer on the last jam, but fell to Gotham 216-99.

Bonnie Thunders secured the first lead jammer status, but Sweet Mary Pain slipped out right in front of her, so she called it for a 0-0 first jam. Casstrator scored the first points for Rocky Mountain, with a 0-6 jam. Immediately after, Bonnie Thunders picked up 4 points to make it 4-6 with under 27 minutes left in the first half. Rocky Mountain’s lead was short lived and Suzie Hotrod was able to get the lead change two jams later, at 8-6 with 24:26 left in the period. Bonnie Thunders extended Gotham’s lead 17-6. Gotham continued to add to the score 27-6 with 18:56 left. 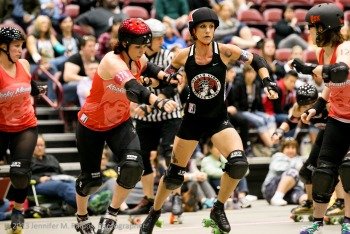 Suzie Hotrod got the lead back for Gotham with 2 points, bringing the score to 29-28 with 15:20 left in the half. Bonnie Thunders put up another 4, followed by another 4 from Hotrod. The defensive machine of Hela Skelter, Sexy Sladie, and Donna Matrix held Alpha Q Up, while Bonnie Thunders pushed the lead to 55-28 with 11:40 left in the first half.

Vicious van GoGo got the first power jam for Gotham as Sweet Mary Pain went to the box for a back block. Vicious called it off before any points were scored and Hotrod took the jammer line. Hotrod called it with 73-28 on the scoreboard. However, Hotrod got a back block call before the fourth whistle. Casstrator put 10 on the scoreboard and called it, with 7:41 left in the first half. Gotham still had the lead at 73-38. Then Toxic Tonic was able to put up a few more for Rocky Mountain making it 73-46 and 6:21 left.

Hela Skelter, Sexy Sladie, and Bonita Apple Bottom’s tight defense held Sweet Mary Pain for 1 full minute before forcing a track cut on Sweet Mary Pain. At the jam’s conclusion, the score was 95-46, 3 minutes left in the first half.

With the pack advantage, Rocky Mountain initiated a pivot line start and forced Claire D Way to cut the track. Casstrator landed a power jam. She called it with 15 seconds left in the half and 104-61 on the scoreboard. Both Rocky Mountain and Gotham called for an Official Review with two seconds left in the period. Rocky Mountain challenged that Claire D Way should have received an insubordination as well as a track cut. Gotham challenged that the track cut happened at all. At the end of the review, no insubordination call and the track cut call stood.

Alpha Q Up finished the Rocky Mountain power jam, but was unable to call it before Claire snuck out of the box and scored points of her own. The period closed with 108-62 on the scoreboard. Gotham added to their lead on the other side of the second half. They continued to gain lead and points against Rocky Mountain. With 21:56 left in the game, the score was 137-63. Ana Bollocks forced a cut on Alpha Q Up with 16:29 left in the second half. Suzie Hotrod was able to push the score to 176-63 with under 15 minutes left.

A few jams later, Sweet Mary Pain was awarded lead jammer status and scored a few points, but not before Claire D Way snuck through for points. The score read 183-67 with 13:20 left in the game.

Claire D Way took away the momentum with a lead jammer status and an apex jump for points before calling it off. Sweet Mary Pain tried to suck Bonnie Thunders back into the pack after getting out for lead, but it back fired as Bonnie Thunders picked up 4 points.

A few jams later, the momentum swung once again in Rocky Mountain’s favor. Vicious van GoGo was called to the penalty box and Rocky Mountain opted for fresh legs in Rox Yorr Soxov as the jammer. Rox pushed the score to 211-96, with 1:10 left in the game.

Toxic Tonic picked up lead jammer of the last jam of the game while the Rocky Mountain defense forced out Claire D Way and pulled her back. After trading a few blows on each side, the game ended with the score 216-99. Gotham took home the win, but Rocky Mountain made it difficult for them every jam until the end of the game.

Gotham Girls Roller Derby placed 1st; Rocky Mountain Rollergirls placed 2nd. Both will go on to the 2013 WFTDA Championships in Milwaukee in November.