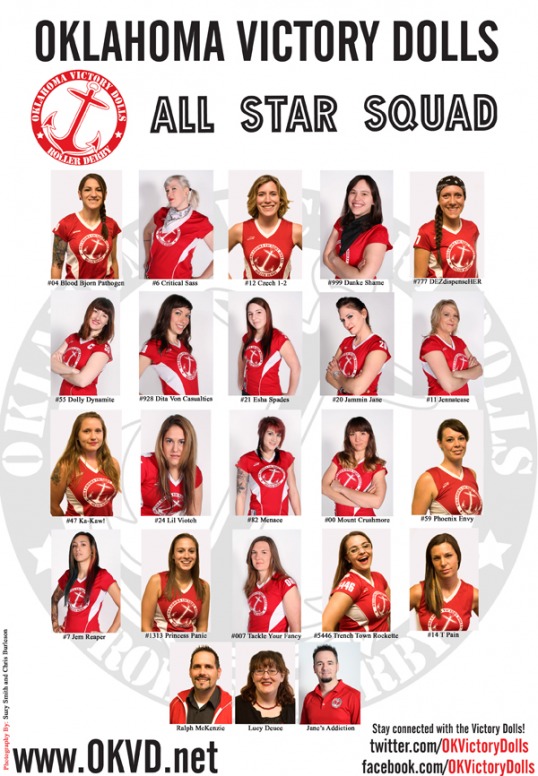 Previous Playoff and Championship Appearances: This is OKVD’s first trip to Playoffs.

Does your league have a motto, or words that it lives by? What is it / what are they? What does it mean to your league?
Our official UNofficial motto is "VD is OK" but that is just a play on our somewhat controversial initials. Pretty much every joke we have is private, and dirty - and we're okay with that. Previously we used "Send in the Girls!" as a nod to our former "theme" of badass WWII pin-ups (which is the reason we have an anchor as our logo).

We also preach the message of "Don't Hate, Roller Skate." Also when we are the underdog of a bout and pull off an upset to rise in the rankings, we call ourselves the "Mighty Dolls". We feel like perpetual underdogs, so that feels good.

Do you have a mascot? If so, what's its name? And will the mascot be with you at Playoffs? Do you have any special cheers for any of your skaters?
We have a few tongue-in-cheek unofficial mascots that show up at our games, like super hot ladies dolled up in sailor gear, dressed up adorable puppies with dirty names, etc, but none will be coming with us to Playoffs. Our super fans make enough noise with their OKVD cowbells that we usually don't need help in that department anyway.

What was the turning point for your league to make it to a playoff this season? Was there a BIG WIN that pushed your team over the edge?
Winning 2013 Clover Cup, in Dallas. We did well at last year's Clover Cup, and worked very hard during the off-season and the first part of 2013 to dominate at that tournament, which we did. We also ended up beating Tallahassee at that point, which has been a goal of ours since we played them in 2012 in Florida.