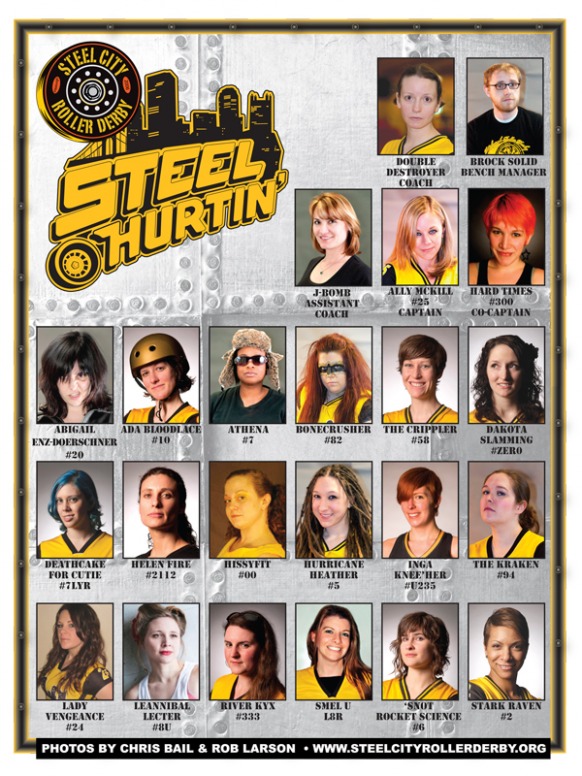 Based In: Pittsburgh, Pennsylvania, United States

Does your league have a motto, or words that it lives by? What is it / what are they? What does it mean to your league?
Before we take the track, you will probably hear us come together and yell "YINZ! YINZ! YINZ!" "Yinz" is a Pittsburgh-ese term for "you guys" - it's like "y'all" in the south. We started using this as our rallying cry in the team's early days. Generally, no one outside Pittsburgh knows what the heck it means but our fellow yinzers (Pittsburghers) love it!

Do you have a mascot? If so, what's its name? And will the mascot be with you at Playoffs? Do you have any special cheers for any of your skaters?
Yes, we have a mascot! Her name is Judy Squeekers and she is a tiny stuffed chipmunk with a bad reputation. We picked her up on the way to our very first tournament appearance in Raleigh, North Carolina.

What was the turning point for your league to make it to a playoff this season? Was there a BIG WIN that pushed your team over the edge?
We've had a lot of highs and lows this season - some big wins, some tough losses, and a few tight, well-played games that could have gone either way. It's been a long season, and we've played a lot of games, so it would be difficult to identify one bout that put us over the edge. We've focused on working hard all season long and learning from every game we've played. Hopefully, all the lessons we've learned will mean success at the 2013 playoffs!