In what started and ended as a close game, Steel City Roller Derby, of Pittsburgh, Pennsylvania, came back from a huge point deficit to narrowly defeat Houston Roller Derby, of Houston, Texas.

Death by Chocolate snagged the first lead jammer status for Houston. She put up 3 points and gave Houston the lead with 0-3 at the end of the first jam. Hurricane Heather and River Kyx answered back with quick-hit jams for the first of many lead changes, at 5-3 Steel City. 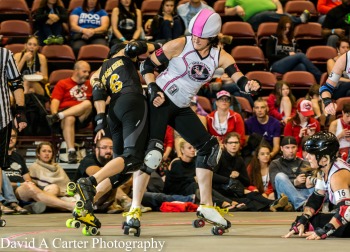 Leannibal Lecter made it 9-3 Steel lead. But Houston’s The Branimal got lead jammer after battling Athena for 30 seconds in the front of the pack while Steel City’s Snot Rocket Science went to the box on a multiplayer block penalty. Houston took back the lead at 9-17.

Steel City began to close the gap with 17 minutes left in the first half. Snot Rocket Science ultimately took the lead back for Steel City 36-33. Leannibal Lecter pushed it 40-33 Steel City about halfway through the period.

The teams continued to trade points and lead changes until a Snot Rocket Science forearm penalty gave The Branimal a power jam. The Branimal gave Houston back the lead at 48-51. Houston’s Death by Chocolate faced a power start and only Ally McKill and Stark Raven on the track for Steel City. She made quick work of the pack, picking up 8 points. With just under 10 minutes left in the first half, Steel City powerhouse Athena forced a track cut on Houston jammer Freight Train. Leannibal Lecter orchestrated another lead change 67-62 in favor of Steel City with 7:28 left in the first half.

Houston got the lead back when Snot Rocket Science got called for a back block as Death by Chocolate exploded through the pack for lead jammer. Houston led 67-76, 5:18 left in the half. Houston rode the momentum to continue to build their lead, with Syrenge and The Branimal pushing Houston’s lead to 67-97. Houston took it over the century mark when Hurricane Heather was called for a multiplayer block and Death by Chocolate already had lead jammer status. A follow-up performance by Freight Train made it 67-122 Houston at the half.

“Our game plan was really to focus on our teamwork and keep our packs tight and together. We were challenged by a lot of good teams and had to really react to that,” said Houston blocker The Angie Christ. “I think we were able to do that successfully throughout the weekend.”

Snot Rocket Science grabbed lead over Death by Chocolate at the start of the first half, but was called for a track cut at the jam’s end. Syrenge extended Houston’s lead to 132-70 over Steel City. Freight Train doubled the point diff at 70-140 with 26 minutes left.

Steel City got a break when Death by Chocolate was called for a cut track. Hurricane Heather made the score 85-140. Athena jammed for the power jam but the tough Houston defense forced a track cut and Death by Chocolate increased Houston’s lead.

Steel City was not done fighting. The ladies from Pittsburgh picked up a few lead jams in a row and cut the lead to 110-161. Then Snot Rocket Science picked up 34 points while Steel’s defense held Syrenge and forced a cut, pulling ever closer at 144-168, 11:30 left. Syrenge got out of the box and passed the star to Brandi Brown, but not before Hurricane Heather made the score 163-168 with 9 minutes left in the game.

“We had an inspiring talk in the locker room at halftime and even though we came out in the second half and we had some things not go our way with penalties, everyone knew that we could still do it,” said Steel City Captain Ally McKill. “We really wanted to play Steel Hurtin’ roller derby; our team has a lot of heart. If there was any time to do it, this was the time to do it.”

Freight Train, as the Houston jammer, was called on a low block penalty. Leannibal Lecter took the lead back for Steel City 176-168. Starting on a power jam, Steel City placed Snot Rocket Science out on the jammer line. Snot didn’t disappoint and the score read 184-168 with 6:45 left in the game. Both Hurricane Heather and Leannibal Lecter added points to Steel’s lead, 187-168 5:13 left in the game.

Freight Train fought for 3 points, pulling Houston within 16 points, 187-171 4 minutes left. On the next jam, Death by Chocolate scored 10 points and 2:52 left in the game. The Branimal busted out for lead jam and 4 points. The Steel City bench went crazy. Houston had too many people on the track with 2 blockers in the box and 3 on the track, but because the jam was not called, no penalty was assessed.

Houston had a tied game in their sights. Death by Chocolate was called lead jammer and came around for points. She called off the jam, but cut the track before the 4th whistle and with 1:11 left in the game, Steel City placed one of their top-scoring jammers, Leannibal Lecter on the line for a power jam. With only 2 blockers on the track, Houston did all they could to stop Leannibal Lecter. Leannibal put up a few points but, not willing to risk a penalty, called the jam. Steel City was the only team with a timeout and Houston could not stop the game. Steel City won 202-185.