Tournament hosts No Coast Derby Girls (#7) grappled with Nashville Rollergirls (#5) for 5th Place in the South Central region at Landlocked Lace Up. 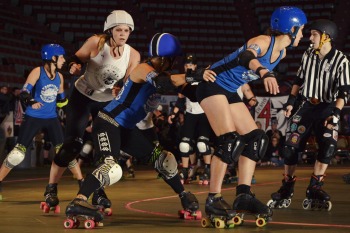 The initial point exchange between the two teams was a wash, but when No Coast asserted their lead jammer-grabbing abilities, the hometown team took the lead. And, like the game prior to this between Omaha and Tallahassee, all of the jammers skated clean in the first period, offering up zero opportunities for either to exploit a power jam situation.

Lincoln jammer Flash Gloria traded the star cover for a spot on the blocking line when she took an intentional fourth minor, and she, along with the rest of the pack from No Coast, successfully held the Nashville jammer 4-Leaf Roller for a minute-and-a-half while Slam Anderson scored 11 for No Coast on two natural grand slams.

Two blockers, one from each team, sat multiple minutes in the box. No Coast's Brooke N Hearts sat three minutes--three jams--for two majors and a fourth minor. Likewise, Nashville's Doom got cozy in the penalty box for two minutes over the course of two jams for major penalties. The score at half was No Coast 62 to Nashville's 41, as the ladies from Lincoln aimed to remind the Nashville that Pershing Arean belongs to the Mad Maxines.

"We've had two great additions to the team in the last three months," Flash Gloria said. "ThickaThanAhSnicka came back a few months ago, and so did Sylvia Bullet. And they've helped really solidify our team. We wanted to come back and prove ourselves this season."

But the second half was a struggle for No Coast. When Flash Gloria got a major cut followed by a major back block, Nashville gained momentum, scoring 24 points. And by the sixth jam of the second, Nashville jammer Britches N Hose brought in 9 points and a lead change as Flash failed to get through the pack. And as No Coast burned their last timeout mid-way through the second period, it looked like the lead was out of reach for the hometown favorites.

Two critical penalties by Nashville jammer Sugar Magmaulya and the Nashville pack made Lincoln's comeback possible. Sugar and Flash were at the line with fewer than four minutes on the clock, and the scoreboard read Nashville 123-88. When Sugar got called on a major high block, Flash took the chance to bring the win within striking distance. At the end of the power jam, with 34 points, Flash had the score to a one-point game: 123-122. And just one jam after that, Flash was back at the line, as was Sugar. This time Sugar got called for a major back block, and when Flash got lead jammer, the crowd went wild. Flash scored another 30 points and the game ended with No Coast victorious, 152-126.

"This is the best we've been in a while," Flash said. "We had three really tough bouts this weekend, and we were disappointed with our losses, but we came back. We've got the best floor, with the best grip, and the best fans here to cheer us on."

No Coast takes 5th Place, and Nashville, who came into the tournament at #5, drops to 6th.