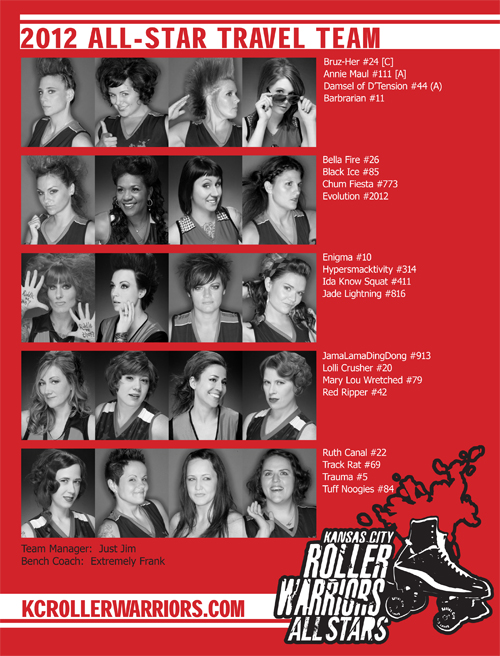 Based In: Kansas City, Missouri

What's one little-known fact about the All Stars?
The KCRW All Stars are self-coached; meaning that we have captains and a training committee who set up practices and lead the team. But all teammates are encouraged to bring new ideas and to inspire each other to be our best.

Who should we watch out for on the track during your appearance at the 2012 Playoffs and why?
People should keep an eye on the overall teamwork of KCRW versus individual players. We don't know who will be the shining star because the potential is in all of us. Plus KCRW believes great teamwork will always outshine individual effort.

Who's the All Stars’ biggest rival?
Whoever we are playing at the moment. :)

What's the most interesting thing about Kansas City?
Kansas City is an up-and-coming metropolis in the United States. There are a number of wonderful developments currently happening from a excitement about great food and cocktails in our local restaurants to the world renowned Kauffman Center to Google Fiber making its first move in Kansas City. Kansas City is also the city of fountains and attracts many visitors with major league athletics and entertainment options. Plus Kansas City is home of the best BBQ in the world! (Just ask Anthony Bourdain.)