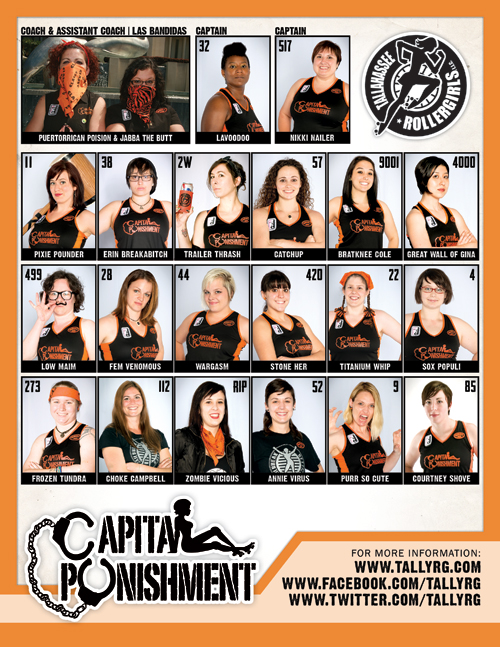 Based In: Tallahassee, Florida

Who should we watch out for on the track during your appearance at the 2012 Playoffs and why?
Definitely keep an eye out for Erin Breakabitch, Titanium Whip, and LaVoodoo who are formidable blockers out on the track. For jammers watch out for low maim, Catchup, Stone Her, and Great Wall of Gina.

Who's the Capital Punishment’s biggest rival?
Our biggest rivals would have to be the Jacksonville Rollergirls who are also in our regional playoffs. We have played each other pretty consistently for the past 5 seasons, with the past two seasons trading off wins with one another. We are very excited, though, to have them and our big sisters Tampa Bay Roller Derby representing Florida in the South Central Regional Playoffs this year! This is the first time three teams from Florida have made it.

What are some game highlights from your travel team season?
Some highlights from our season were our first game of the season (and win) against Green Country (215 to 178), a one point loss to Columbia Quad Squad (154 to 155), a huge win against Big Easy RollerGirls (270 to 28), and an overtime jam win against Blue Ridge Rollergirls (181 to 177). Also our travel team, Capital Punishment, has been able to post over 200 points in 8 of our 12 bouts this season!