Texas Rollergirls (#2) win 2011 South Central Playoffs, taking the top spot in the region for the first time in over a year, and #3 Nashville Rollergirls keeps their spot and earns a trip to WFTDA 2011 Championships. 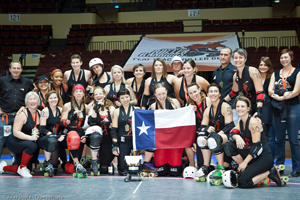 The first game of the day at Show Me Der-B-Q had #6 Tampa Bay Derby Darlins matched up with #10 Omaha Roller Girls in a battle for ninth place. Tampa controlled the pack throughout the bout, making it difficult for Omaha to ever grab the lead, and Tampa Bay came out victorious, 176-73.

"We finally played our game that we've been practicing the last several months," Tampa Bay captain and blocker Lunch Lady said. "It took us until the last game of the tournament, but we did. We got our heads in the game and showed up. We're going to go home and keep building. We know exactly what to fix, and we're going to keep working for next season." 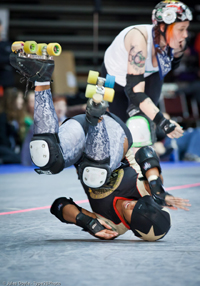 For the first time in WFTDA tournament history, two teams skated against each other twice. Green Country Roller Girls (#8) took on #9 [Gold Coast Derby Grrls] in a grudge match for 7th place. Green Country, after being upset by Gold Coast in Day 1, came back to defeat Gold Coast in their final bout of the tournament. Gold Coast took the early lead, but after Green Country took advantage of a few power jams, the first period ended 73-44. The second period saw Gold Coast losing one of their blocker/jammers, Baller Shot Caller, to injury. After that, the team tried to mount a comeback against Green Country, but to no avail.

"We started the tournament off a little rough," Green Country captain and jammer Perkeylicious said. "We went from #8 to #9 and then we got our mojo back when we upset Tampa. Once that momentum came back yesterday afternoon, everything just came together." 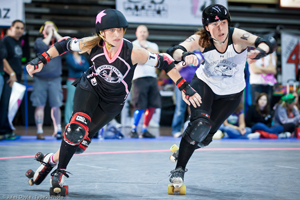 The bout for 5th and 6th place between Houston Roller Derby and No Coast Derby Girls turned out to be a nail-biter that came down to the last two jams. The score was close for the first few minutes of the first half, but when No Coast had a full penalty box for nearly three jams, Houston took advantage of the situation. At 14 minutes left in the first, the score was 27-26 to Houston, but only five minutes later, it was 75-26. The half ended 97-52. When Houston's Rebel Ann fouled out with 14 minutes left in the second half, No Coast was well into a momentum shift. The score was tied at 144 with 2:30 left in the game when No Coast jammer Flash Gloria grabbed nine points in a power jam. However, Houston's Mistilla the Killa answered back when she got a 20-point jam to end the game. The final score was 173-157.

"It was a hard game because we were in a groove in the beginning and then we lost a lot of skaters to the box," Houston captain and jammer Beverly Kills said. "To mentally endure and adapt our strategy in that situation is really tough. But we did. We did a great job maintaining our mental stability. We stuck it out to the end. This team is full of love and perseverance, and that what I love about skating for Houston. RAWR!" 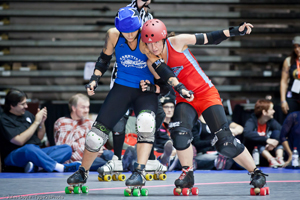 Nashville Rollergirls (#3) fought and defeated Atlanta Rollergirls to keep their third place spot and win a trip to WFTDA Championships in Denver. While the first 10 minutes of the bout were close, Atlanta's penalty trouble made Nashville's task of grabbing the ticket to Champs that much easier. The score at half was 99-37, and Nashville continued to trounce Atlanta for the rest of the game. In fact, the ladies from Music City held Atlanta to gaining only one point in the entire second half of the game, ratcheting up the score for themselves. The final stood at 213-38.

"We were playing the way we wanted to play all weekend," said Nashville jammer and blocker Rock Nasty, who was voted the tournament's Most Valuable Player. "And we were able to stick to our plan. It was great because we were executing what we have been practicing all season. Out whole focus now is to compete at Championships and show everyone that we're a tough team. We want to skate on Saturday." The Championship match for the South Central Region has turned out to be a perennial one between Kansas City Roller Warriors and the Texas Rollergirls. The two teams split lead jammer status and exchanged points for an intense first half. Penalty trouble for Kansas City made it possible for Texas jammer Vicious Van GoGo to get through in the last jam of the period and inch out a lead at the half, 53-59 Texas. The second half of the game was as tight as the first. When Texas blocker Sara Hipel was expelled for gross misconduct with only 5 minutes left, it lit a fire for the Texecutioners, who went out and attained lead jammer status multiple times before the end of the game. Texas jammer Olivia Shootin' John waited out the game clock after gaining lead jammer status in the last jam, ending the game 132-92.

"I'm really proud of our team and our region," Texas co-captain and jammer Bloody Mary said. "I think a lot of people underestimate the North and South Central Regions, but we're really coming up. I'm so proud to be going to Championships with Kansas City and Nashville."

Learn more about the 2011 Big 5 tournaments!

The WFTDA 2011 Championships, Continental Divide and Conquer, are hosted by the Denver Roller Dolls November 11-13 in Broomfield, CO.