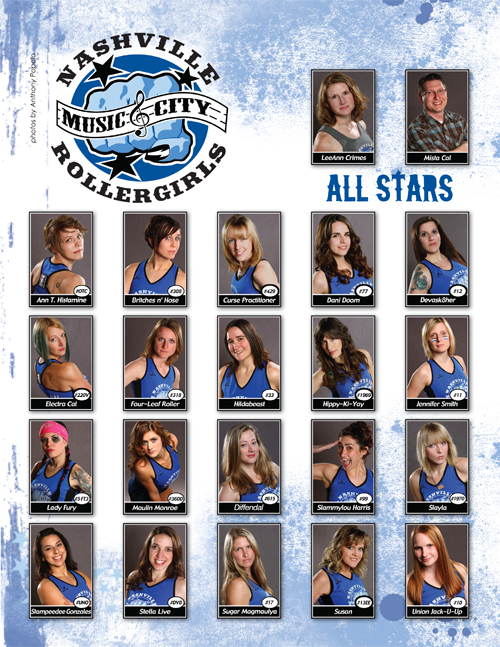 Based In: Nashville, Tennessee

Have there been any notable roster changes since your last Playoffs appearance?
Since last year, we've lost a few key players. 2011 SC tournament MVP Rock Nasty is out for injury. Rambo Sambo moved back home to New England and may be joining up with Boston.

Who should we watch out for on the track during your appearance at the 2012 Playoffs and why?
Sugar Magmaulya. She tied the record for highest scoring jam in a WFTDA-sanctioned bout (45 points), and she's a fierce blocker too.

What are some game highlights from your 2012 season?
Getting to play two great teams from the northeast (Charm and Philly), taking a lead in the all-time series against Atlanta for the first time (4-3), and eking out a win against Brew City.

What's the Music City All Stars’ most memorable derby moment?
2010 Playoffs, beating Atlanta to earn a spot at Champs.

What's one super special thing about Nashville that makes skaters stay with your league?
The fact that we are so small but have achieved such great things. We've had so many ups and downs, and I think that just makes us each care that much more about making sure our league succeeds and sustains. We are also a really drama-free league, so it's easy to want to be a part of something like that.