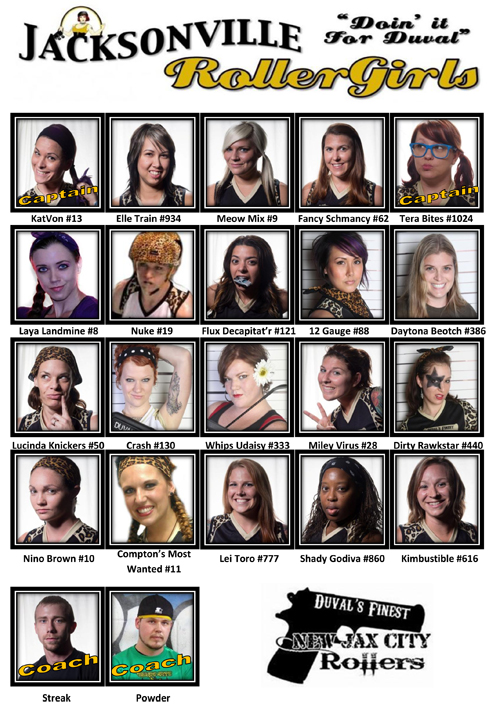 Based In: Jacksonville, Florida

What's one little known fact about the New Jax City Rollers?
Our travel team works closely with the Magic City Misfits (#2 in the Mens Roller Derby Association). We practice and scrimmage against them every week.

Who should we watch out for on the track during your appearance at the 2012 Playoffs and why?
We have worked super hard this year to become a cohesive, well-oiled team. Each skater on our team has a unique style and skill that she brings to the track.

What's your travel team's most memorable derby moment?
There is no surprise answer here! We would have to say getting into the South Central regional playoffs! We worked super hard this year to prove that we could play a higher level of derby. Both mentally and physically, we have grown leaps and bounds this year!

Who's the Rollers’ biggest rival?
We have a friendly rivalry with the Tallahassee Roller Girls. Jacksonville and Tallahassee were neck-and-neck this season with rankings. Both teams made it to Playoffs and we couldn’t be more excited!

What are some game highlights from your travel team season?
This year was actually the first year we played in weekend tournaments. Clover Cup (Dallas, TX) was one of the best experiences we could have ever asked for. On and off the track, we learned a lot about our team as a whole!