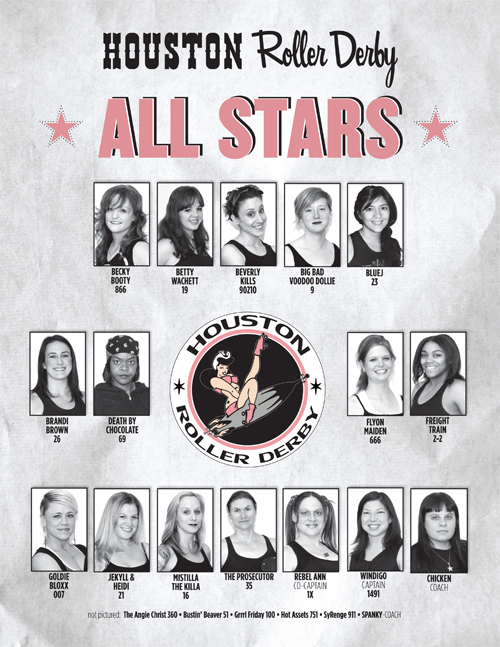 Based In: Houston, Texas

Have there been any notable roster changes since your last Playoffs appearance?
Wicked Sweet, Shawshank and Radium DK retired from travel team after last season. Death By Chocolate has returned from retirement and will be skating with the all-stars this playoffs. We've also added a promising new skater, Freight Train, to the team.

Who's the All Stars’ biggest rival?
HRD loves playing the Texecutioners [of the Texas Rollergirls]. Austin is only a three-hour drive, so we try to plan at least a few matchups each season. The cross-team rivalry and friendship makes those games a unique type of fun.

What are some game highlights from your 2012 season?
The All-Stars swept this year's Clover Cup tournament held in March in Dallas, winning first place and the coveted cardboard cat trophy.

What's the most interesting thing about Houston?
Houston is an incredibly diverse city. Despite being in a red state, we have a lesbian mayor, a proud gay community, unique groups like the Art Car artists and Urban Animals street skate gang, great local music and an impressive fine arts scene. Roller derby fits right in.

What's your crowd like at home?
We have a great group of long-term superfans but still get plenty of people who are new to derby at each bout. We sell anywhere from 1200 to 1800 tickets to our bouts.