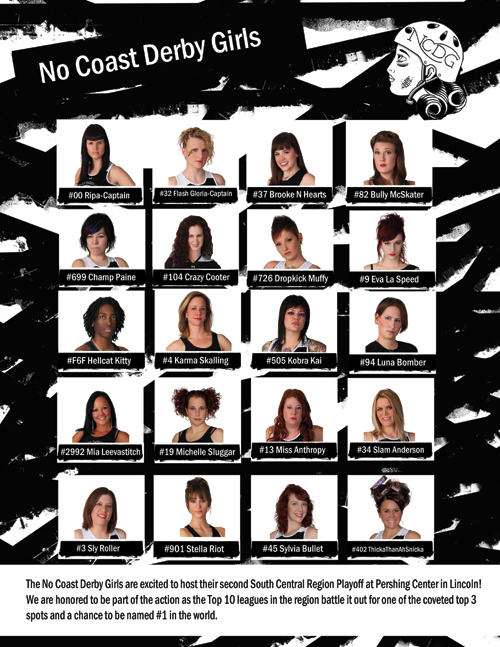 Based In: Lincoln, Nebraska

Do you have any memorable moments from your past Playoffs trips?
This will be the 4th Region Playoff appearance for the Mad Maxines, consecutively making the top 10 since they became eligible for Playoffs back in 2009. With each passing season, we gain more experience and learn to deal with the nerves that come with playing in such an important tournament. We surprised a lot of people back in 2010 when we hosted a playoff for the first time. We were seeded 8th and made the biggest upward movement, finishing 5th, during that tournament season upsetting both Dallas and Tampa that year.

Have there been any notable roster changes since your last Playoffs appearance?
Sylvia Bullet will be back on the roster this Playoff season after having taken the 2011 season off to enroll in an accelerated nursing program. She will play an instrumental role for the No Coast defense.

ThickaThanAhSnicka returns after being gone throughout almost the entire 2012 regular season. She’s now the proud mother of a bouncing baby boy, but she didn’t lose any of her derby edge or her famous booty block during her derby departure!

What's one super special thing about No Coast that makes skaters stay with your league?
We’re competitive. We like to win and we work hard at doing just that. Skaters stay because they want to be part of that winning attitude. We’ve made a solid name for ourselves among the country’s derby community as well as in our home town. Now we don’t just win for our own personal goals, we win because we have a community behind us who we want to make proud of us.

Who's the Mad Maxines’ biggest rival?
Omaha – we play them the most often as they are just 50 minutes down the road. We’ve gone back and forth with them, trading off in the winning column for the past 6 seasons and it’s always an exciting game and a huge crowd whenever we play them, home or away!

Would you like to give a shout out to any of your officials and staff that will be at Playoffs with you?
Our head NSO, Alicia Teaze, has been coordinating bouts and putting together one of the best NSO crews for several seasons now. She’s an unsung hero out on the track who has made a name for herself among the derby and WFTDA community. Reliable and organized, Teaze will have our bouts running the smoothest and we consider her the best penalty tracker in the country. ;-)