In a last-chance effort to punch a ticket to Championships in Atlanta, Kansas City Roller Warriors (#2) fought for their seed against Tampa Roller Derby (#4). 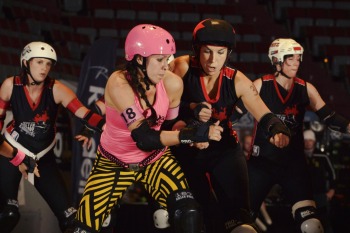 It was a close match-up to say the least, with the Roller Warriors clawing for the lead. And they thought they had it in the opening jams when Tampa's Flirtin' with Disaster went to the box for a major track cut. Kansas City jammer Enigma put the lead at 36-12 early on. However, Kansas City often played slim on the blocker line-up, making a lead change almost inevitable. In the first half, both Trauma and Annie Maul picked up 5 box trips in the first half.

In a surprise turn, Kansas City's jammer went to the box twice in a row, affording Tampa 42 points in just under four minutes, cementing the lead change at jam 13, with 75 Tampa, 44 Kansas City. But the Roller Warriors' seven lead jammer grabs at the end of the period and Reeces Tear Ya To Pieces' major back block, Hypersmacktivity rolled away with 30 points to close the period at 87-89 in favor of Kansas City.

"I think it's almost better for us to go into a jam down on points," Kansas City blocker Annie Maul said. "Being down puts a fire under our ass and makes us fight for every point."

The momentum the Roller Warriors gained at the end of the first carried over to the second. Jammer Trauma scored four in the opening jam and sealed the lead change that was Kansas City's to lose throughout the second. Try as they might, Tampa couldn't catch the pack or put any substantial points on the board until the lead was too far out of reach for them. In the nineteenth jam Hypersmacktivity went to the box for a fourth minor and Tampa's Flirtin with Disaster scored 24.

But stacking those 24 pellets on their mound of points was as useless as stacking BBs on a windy day on the plains of Kansas. A bit of wind fell out of the Roller Warriors' sails when blocker Annie Maul fouled out in the twenty-second jam, but by them the lead was nearly assured. With lead jammer status, Kansas City jammer Track Rat let the clock wind down, solidifying the team's trip to Championships. Kansas City defeated Tampa 209-168 and took the third spot, having dropped one seed over the course of the weekend. Tampa maintains their seed at fourth.

"Obviously we haven't had a year of just destroying everyone," Annie Maul said. "And I think that makes us a bit of an apprehensive team. We've really tried to focus on having fun in games, and having fun with each other. And that's what we got to do today."