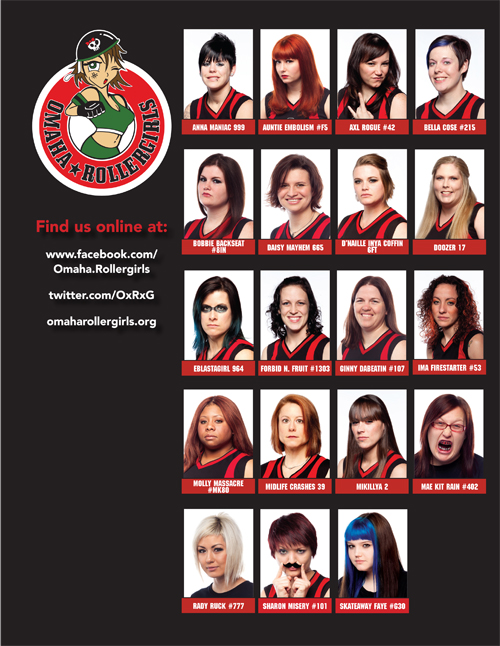 Based In: Omaha, Nebraska

Who should we watch out for on the track during your appearance at the 2012 Playoffs and why?
Our two star jammers, Ima Firestarter #53 and Anna Maniac #999, have had a very successful season and we’re confident they’ll continue to make us proud. Their agility, speed, and crafty moves are nothing short of impressive.

Have there been any notable roster changes since your last Playoffs appearance?
A large majority of the same great players you saw at last year’s Playoffs will be there again this year. There are always a few transitions from season to season, and we’re very excited to include a few newcomers in this year’s charter.

Who’s the All-Stars biggest rival?
Due to the close proximity and well-matched talent, Lincoln’s No Coast Derby Girls continue to be our biggest rival. We are grateful that such a strong team is located so closely to us, as this encourages us to strive to continuously better ourselves.

What’s Omaha’s most memorable derby moment?
The Omaha Rollergirls began, as many teams do, as a small, grassroots organization of dedicated skaters and fans in a skating rink on the edge of town. Our 2011 season allowed us the opportunity to expand and grow this organization dramatically by moving our games to a large arena. The first game of that season, we sold out the arena and we were forced to turn away upwards of 600 fans. The team was overwhelmed by the response of our fans that evening, and that season.

What’s one super special thing about Omaha that makes skaters stay with your league?
One word: Pinwheels.