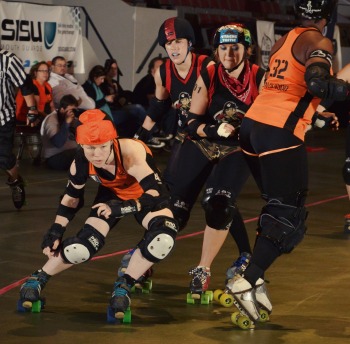 The two met in Game 1 of Landlocked Lace Up, with Omaha victorious 201-142. It was a different story, however, for Game 14. Tallahassee used the momentum from their win against Houston to regroup and play a tighter, stronger game against Omaha. With zero power jams in the first half, and quick call-offs to protect points, the gap on the scoreboard was a mere 20 points by the end of the period.

Most jams were less than a minute in length, and each team used the quick seconds in between jams to recharge for the next go-round. Omaha grabbed the majority of lead jam status and jammers paid close attention to one another. While things were clean for the jammers, that was not the case for blockers. Omaha blockers spent 10 minutes in the box while Tallahassee spent 14 minutes serving time.

"We worked really hard to hold our own on the track today," Omaha blocker Daisy Mayhem said. "[Because of penalties] we had several jams with only two out there, but we were able to hold them, and we rocked it."

The second period was largely a repeat of the first, with a multitude of quick jams and 4-point call-offs. However, the clean jammer stats from the first fell away during the second. Ima Firestarter got a major cut at almost the same time Stone Her received a multi-player block major, the two racing to the box to serve only a few seconds. Tallahassee won the power jam swap, though, with 12 points to 10. Omaha held on to the points they earned, even when the blockers on the track numbered only two.

The score remained within reach to the end for Tallahassee, but Omaha held together and was able to come out with another win. The final score was 132-118.

Omaha ended the tournament higher than they started, moving up one spot to #7, and Tallahassee also had a one seed move to #8.

"We had some ups and downs this tournament," Omaha's Daisy Mayhem said. "But in the end we came out better than we started, and that's a good thing."

Next Post: Bout 15: No Coast Derby Girls vs Nashville Rollergirls