In the second semifinal match of the night, Gotham Girls Roller Derby (East #1) took on Denver Roller Dolls (West #2). Despite a strong performance by Denver, Gotham came out on top to qualify for the championship game. 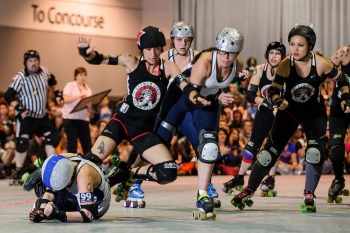 While Gotham came out strong against Denver, their early work was undone when Suzy Hotrod, Gotham jammer, went to the box for a major track cut in the second jam opening the door for Denver jammer Sandrine Rangeon to score 14 points. However, the Denver lead was quickly cut down by Gotham’s stellar jamming and blocking skills. After that, Gotham was solidly in the lead until the 13th jam when Suzy Hotrod went to the box for two minutes (one for a back block major and one for an insubordination). The two minutes were enough for Denver to score 43 unanswered points against Gotham, an almost unheard of feat.

Gotham blockers, lead by Fisti Cuffs and Sexy Sladie, transitioned for strong defense as they waited for their team to field a jammer, doing a good job to hold the Denver jammers despite some small pack numbers for the ladies from New York. The 43 unanswered points were reversed moments later, as Bonnie Thunders scored 35 points after a trip to the box by Sandrine Rangeon on a fourth minor, a penalty drawn by Sexy Sladie’s block to the outside of the track. The half ended with Gotham 121, Denver 67.

Bonnie Thunders, who already had an outstanding show in the first period, jammed three in a row at the start of the second, scoring 17 points. The Denver defense tried to hold the Gotham jammers and offensive line but the Gotham Girls had their hearts set on going to the Championship game against the Oly Rollers. There was a glimmer of hope for the Denver Roller Dolls, as Sandrine Rangeon was able to score 21 points on a power jam after Brazilian Nut went to the penalty box, but the points were nearly nullified as Brazilian Nut score 15 points, resulting in a 6-point differential for the Mile High Club. Bonnie Thunders scored 138 points, more than Denver scored in the entire game.

Gotham held Denver to only 6 points in 14 jams, and that was what led them to the championship round. Denver will play Texas for third place at 1 p.m. EST, and Gotham moves on to play Oly at a chance for a third championship.