In the fight for 3rd place of the 2012 WFTDA Championships, the Denver Roller Dolls’ Mile High Club took on the Texas Rollergirls’ Texecutioners in a heart-stopping bout that came down to the last jam. Denver ultimately pulled out a victory that was largely decided by power jams. Tough games throughout the weekend could have led to severe fatigue, but neither team showed signs of slowing down. Today’s game was a demonstration of fierce athletic prowess – from the first whistle, both teams were laying devastating hits that continued throughout the game. 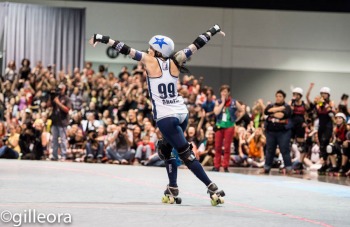 Denver and Texas both created solid walls, and the score was tight at the beginning of the game. Denver’s exemplary teamwork let them control the pack, which frustrated Texas early on. A Texas power jam with most of Denver’s defenders in the box gave Texas the first sizeable lead in the game. Trading lead jammer back and forth, Denver was able to make a scoring run, but couldn’t catch up with Texas’ lead. Even with powerhouse jamming by Sandrine Rangeon and Heather Juska, Texas defenders like Polly Gone and Smarty Pants shut down most attempts at a Denver scoring run. The half ended with a score of 125-72, with Texas in the lead.

The second half brought a renewed energy from Denver and a tightened-up defense. Denver blockers Jes Rivas, November James, and Tracy Akers made sure Denver got lead jammer, and the team began their climb. What started as a power jam for Texas turned into a power jam for Denver, and this was the turning point for the Mile High Club.

In a record-breaking power jam for Denver late in the period, crowd favorite Sandrine Rangeon scored 44 points, and put Denver in the lead. With seconds left on the clock, and a deficit of only 11 points, Texas called a time out. In the last jam, Denver got lead jammer, and called it off the second the period clock ran out, placing Denver 3rd in the tournament.