In the championship bout pitting east versus west, the Oly Rollers (West #1) faced Gotham Girls Roller Derby (East #1) in a replay of the 2011 championship game. After a hard fight, Gotham took home the championship for the second time in a row, becoming the only team in WFTDA’s history to be a three-time champion. Oly fell short last time the teams met, and came out swinging today. Gotham has always been known for stellar teamwork, and today’s showing was no different. 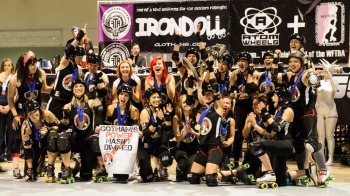 The bout started off with Oly jammers going to the box, and Gotham produced a 4 jam scoring run that left them in the lead 51-0. Atomatrix put the first Oly points of the board with a 29-point power jam. The Cosa Nostra Donnas systematically chipped away at Gotham, and finally took the lead. From there, the two teams traded the lead back & forth, with the crowd roaring louder every time. Late in the period, Gotham’s defense, led by Sexy Slaydie, Mick Swagger & Ana Bollocks, shut down Oly’s jammers and left them scoreless for the last 6 jams. The score at the half found Gotham in the lead 102-81.

During the second half, Oly’s blockers led by Sassy and Tannibal Lector attempted lay the smackdown on Gotham, and chipped away at the lead by 5 and 10 points at a time. A few Gotham power jams put the point spread further, but Oly fought back hard. During a Gotham power jam late in the half, they put the spread at almost 80 points. Even though On Da Sligh was demonstrating her phenomenal jamming skills along with Atomatrix, Gotham was able to beat Oly by more than 100 points.

Final score: Gotham 233, Oly 130. Gotham defends their 2011 title to become the 2012 WFTDA Champions and will take home the Hydra, as well as another set of tournament medals for their collection. Oly takes second place and will take home a batch of silver Grits & Glory medals.