The Women's Flat Track Derby Association congratulates the Oly Rollers of Olympia, WA, on winning the 2009 WFTDA National Tournament. The WFTDA tournament season came to an end on Nov. 15, 2009 after the top 12 seeds for the 2009 roller derby season faced off at the Pennsylvania Convention Center in Philadelphia, PA, at an event hosted by the Philly Roller Girls. Appropriately named "Declaration of Derby," the National Tournament once again brought together the best talent flat-track roller derby has to offer. 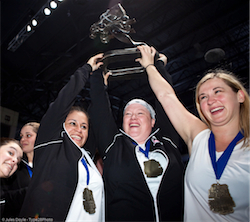 The Oly Rollers joined WFTDA in April 2008, and this was the first tournament season in which the league was eligible to participate. The Cosa Nostra Donnas won the 2009 Western Regional Tournament in October and entered the 2009 National Tournament as the #1 seed from their region, earning a first-round Bye. The team defeated two prior national champions, Gotham Girls Roller Derby (2008) and Texas Rollergirls (2006), on their path to claim The Hydra, WFTDA’s championship trophy.

The Texas Rollergirls of Austin, TX, took second place in the tournament, followed by the Denver Roller Dolls in third place and the Rocky Mountain Roller Girls in fourth place.

Wicked Wheels of the East

Derby on the Rocks

Philadelphia, The City of Brotherly Love, is the largest city in Pennsylvania and the sixth most populous city in the United States. It is home to the Liberty Bell, Rocky and the Cheese Steak. Philadelphia’s distinct areas and eclectic residents give the city history, diversity, and a unique flair.

Located in the heart of Center City Philadelphia, the Pennsylvania Convention Center is adjacent to a major hotel and connected to the hub of the city’s public transportation system. This central location will facilitate public access, reduce travel expenses and increase enjoyment for all attendees to the tournament and associated activities.

Staging WFTDA’s Declaration of Derby 2009 in Philadelphia — a major metropolitan media market — will enable local and national news and sports affiliate stations to cover the tournament — and women’s flat track roller derby as never before!

The Philly Roller Girls look forward to sharing the historic culture of the "City of Sisterly Shove" with our roller derby family from all over the world.