No. 4 seed Brewcity Bruisers (Milwaukee, Wisconsin) and No. 10 seed Brandywine Rollergirls (Downingtown, Pennsylvania) met on Sunday afternoon in the intense and well-matched fight for seventh place. 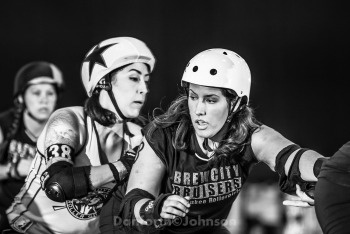 Brandywine had won their first Friday game against No. 7 seed Omaha Rollergirls (Ohama, NE) and then fell to No. 2 seed Detroit Roller Girls (Detroit, MI) and No. 9 seed Suburbia Roller Derby (Yonkers, NY). Brewcity lost their first game to No. 5 seed Fabulous Sin City Rollergirls (Las Vega, NV) but won their next game against Omaha.

Brewcity had prepared well for Playoffs this year skating in three tournaments this season: the Cover Cup, Midwest Brewhaha and Skate to Thrill Invitational. All in all, they played 17 games over the season and had a record of 12-5.

Brandywine was unranked at this time last year but played 11 games throughout the 2014 season and wound up with a record of 5-6. They brought only 11 skaters to the tournament after losing several of their regular rostered skaters before Playoffs.

It was clear right from the start that Brandywine was more rested or more comfortable in this game than the last two they played. Either it was the full night of sleep, or time to regroup, or something else. But the players looked confident, stayed tight and their jammers were able to maneuver through Brewcity’s blockers.

When both teams were able to keep their jammer and at least three blockers on the track, they were evenly matched in skill and strategy. Brandywine was great at recycling the jammer again and again, but Brewcity was better at playing effective offense when their jammer needed help.

This cost Brandywine during their power jams when their jammers got caught behind Brewcity’s walls. Luckily for them, their jammers were wily and agile and were frequently able to get through on their own.

Very early during the first period a 19-point power jam in Brandywine’s favor gave them the first significant lead of the night. But not too long after, Brewcity capitalized on its own power jam and put up 10 points and brought it to a 1 point game. It wouldn’t be the last time it was a 1 point game.

Brandywine clamped down on the defense and held Brewcity scoreless for the next four jams but then Not Knotty headed to the box for a penalty and Brewcity collected 29 points on the power jam.

Again, Brandywine went on the rebound and chipped away at the Brewcity’s lead. The teams traded power jams and both inched upwards. At the half Brewcity still held the lead 110-74.

During the second half, the teams jockeyed back and forth and brought it to a one point game three different times and tied it going into the final jam as a tie game 168-168.

Brandywine does not play enough offense for their jammer. Brewcity gets lead jam with some help from her blockers and Brandywine’s Buenas D. A$$ is held by Brewcity long enough for Frank Hurtr’r (#216) to score 12 points more than her opponent giving her team the win.

In the end, Brandywine was able to better their standings moving from the 10 seed to 8th Place while 4 seed Brewcity lands in 7th Place.