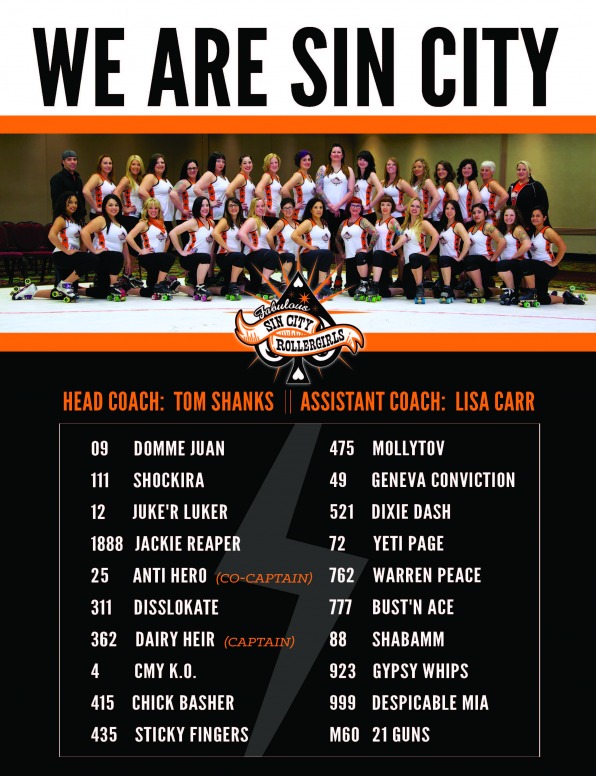 Based In: Las Vegas, Nevada, USA

At the conclusion of last season, our team had two veteran skaters retire (Mary Marvel and The Force). Our team also lost three veteran skaters to relocation (Susan B. Bruisin; Afternoon D’Lightning; and Bone Eata). Therefore, our team entered this season with the understanding that we would have some rebuilding to do, but we did not let that prevent us from aiming high and setting the collective goal of making a return to D2 this season.

By far our biggest win of this season, both in game points and morale boost, was our close win against Sacred City on June 21 in San Diego. Our team watched Sacred play at a very high level last season at both Dust Devil and Big O, and as such, we admired and looked up to Sacred. It was a great challenge to play against them, and it was a really great win for our team to secure the victory in the last jam of the game against such a well-respected and classy opponent. That win gave us the confidence we needed to proceed through the second half of the season with the feeling that we are doing things right and have cultivated something special this season.

Is your travel team doing anything new or special to prepare for Playoffs?

Our team adjusted its defensive strategy mid-season and has been fine-tuning and perfecting it ever since, adding subtle wrinkles and expanding its incorporation into all facets of our play. We have continued to enhance it in preparation for Duluth.

Additionally, our team has incorporated post-practice off skates workouts as a means to further boost our skaters’ workout regimens, and provide the team with an additional avenue for bonding throughout the week. The skate-specific strength training and cardio has boosted the play of several skaters, and the workouts have made the participants an even tighter knit group.

Outside of physical and mental prep, we've been fundraising for the trip to playoffs. We've had a very successful gofundme campaign and to date have raised $2,620 in 18 days! The success of the campaign was largely due to the "Duluth Duluth Duluth Is On Fire" merchandise Cheeky Beech designed. Anti Hero & Domme Juan partnered with our head NSO Ryan and his wife Brianne on the rest of the details. The support has been truly amazing!

Does your league have a motto or words it lives by?

We have a lot of cheers and mottos on our team. But, our most common and beloved are: “30 Strong” (symbolizing that all 30 skaters on the All-Stars are part of one team, one unit, with one goal); “Until the Last [Jam/Hit/Point]” (signifying that we will fight, no matter the circumstances, until the game is completely over); and “All we got, all we need” (meaning that out on the track, all we have is each other to look to and look out for, but that’s all that we will ever need).