Using timely surges of momentum, the battle for ninth place at the Division 2 Duluth Playoffs, was anything but dull. Tucson Roller Derby (6) from Tucson, Arizona took on and fell to Omaha Rollergirls (7) of Omaha, Nebraska in the early morning bout of the day, 184-138. 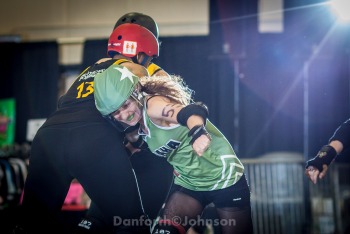 Tucson took an early lead from the opening jams as jammer Death Proof racked up lead jam after lead jam in what looked like the Saddletramps would roll away with the win for ninth. Omaha made valiant efforts to overcome Tucson Roller Derby, fielding experienced jammers Flash Gloria and Ima Firestarter. As it looked like Tucson had solidified the lead in the first half, Omaha took a timeout with just under 14 minutes left in the half, after which they rallied and closed the gap to 30 points, 52-22.

Omaha’s momentum stalled, however, as Tucson’s pivot Bone Eta went down during an attempted star pass.

As Tucson looked to power through the game, jammer Mystery Meat got three penalties in a row, giving Omaha the opportunity it needed. Omaha blockers D’Naille Inya Coffin and Sharon Misery helped open the track for jammers Flash Gloria and Holmes Sweet Holmes to overcome Tucson’s lead in the final minutes of the first half. Omaha led Tucson by 18 as the ladies skated away to halftime, 78-60.

Coming back on the track, Omaha never gave up the lead they gained in the first, despite strong jams and occasional power jams for Death Proof and Pixie Axe. Tucson jammer Pixie Axe led the Saddletramps in scoring until she was expelled for an egregious block with 9:34 left in the game. The loss for Tucson solidified Omaha’s lead, and it kept the ladies in green on a powerful ride until the game’s conclusion.

Tucson managed the final seconds of the game, using two timeouts to stop the clock and forestall the loss in order to get off two more jams; the forestalling failed, however, as Omaha jammer Flash Gloria got lead in the final jam and called the game off.