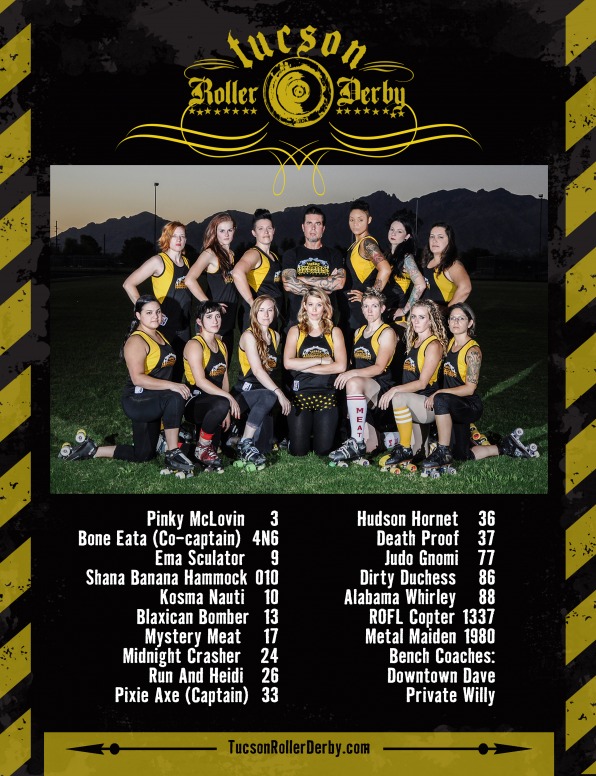 Based In: Tucson, Arizona, USA

Oh yes...always! Two of our best blockers had serious injuries this year. In March, Metal Maiden suffered a spiral fracture in her left tibia/fibia during our game against Duke City. Then in May, (the week before playing SoCal no less!) Judo Gnomi fractured her ankle during a scrimmage. Luckily both of them should be back on the track in a couple of months. We lost our jammer Iva Coaldheart to Sin City - though we also got Bones from Sin City. So I suppose that's an even trade trade (we still miss you Iva!). :)

For the past 2 years, we've been building our team based on advanced skills, consistency, and strength. Our biggest win this year was against Sin City at Dust Devil 2014. They had beaten us at Dust Devil 2013 and the summer prior in 2012. So that win really helped us boost our rankings.

What are some game highlights from your travel team season this year?

I think our best moment this season was during our game against Humboldt at Big O. We didn't come out as strong as we wanted and we ended up at a decent deficit in the first few minutes of the game. We had a team time out, discussed a few tweaks, and turned that deficit around pretty quickly. That was a big moment for our team - to keep calm and collected and make the adjustments we needed for our team to win.

One of our newer skaters, mild-mannered wild-child Ema Sculator, really took this time out to heart. When we were getting scattered on the track, she would yell "KEEP CALM" in a not-so-calm manner. But it worked!

Will you league be hosting any watch parties during the Playoffs?

Oh yeah. These happen every year. It's usually pretty casual, but sometimes we'll project games onto a large screen outside and do a barbecue/party. We'll get anywhere from 10-50 people.