The top of the consolation bracket is the battle for fifth place and this year’s 8 seed, Treasure Valley Rollergirls (Boise, ID) and 9 seed Suburbia Roller Derby (Yonkers, NY) battled for the top position. The teams had met in their first game on Friday morning in this tournament when Treasure Valley took the win in a close game (129-109). But it seemed that Treasure Valley found the secret of Suburbia’s success and figured out how to shut it down. 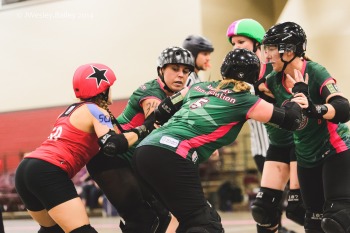 However, the telling statistic was lead jam. In the first game between the teams, they split lead jam: Treasure Valley won it 21 times, Suburbia won it 20 times. In this game, Treasure Valley’s blockers held Suburbia’s jammers long enough for their jammers to win lead 32 times compared to Suburbia’s 9 times. That’s the game right there.

In addition, Treasure Valley’s blockers figured out how to shut down powerhouse, agile and persistent jammers Lauren Forcer (#50), Charlotte Bupowski (#382) and Veloce Villain (#84). Treasure Valley had consistently tight tripod walls that folded around these jammers again and again. And when they weren’t holding them captive on the track, they knocked them outside and recycled them again and again.

Meanwhile, Treasure Valley’s jammers Dawn of the Shred (#462), Udaho (#208) and Demolition Barbie (#1959) were able to bust through many of Suburbia’s walls. When Suburbia was able to hold their own tripod against a Treasure Valley jammer the game looked like a mirror image.

Both teams were good at mounting a quick offence when their jammer needed it. But Suburbia had to do it more often and would sometimes miss the cue, or while they were trying to free their jammer, they missed the Treasure Valley jammer.

In addition, five of Suburbia’s jammer penalties (out of six) came in the second half of the game giving Treasure Valley more scoring opportunities, which they took with both skates and sprinted with it.

In addition to the power jams, Treasure Valley was able to use their lead jam status to hold Suburbia scoreless in 15 of the jams in the second period.

Both teams fought until the last four whistles and were ready to keep going. Although it’s probable that another five or ten minutes wouldn’t have made a difference in which team won the game, neither team seemed to care. They just wanted to keep playing.