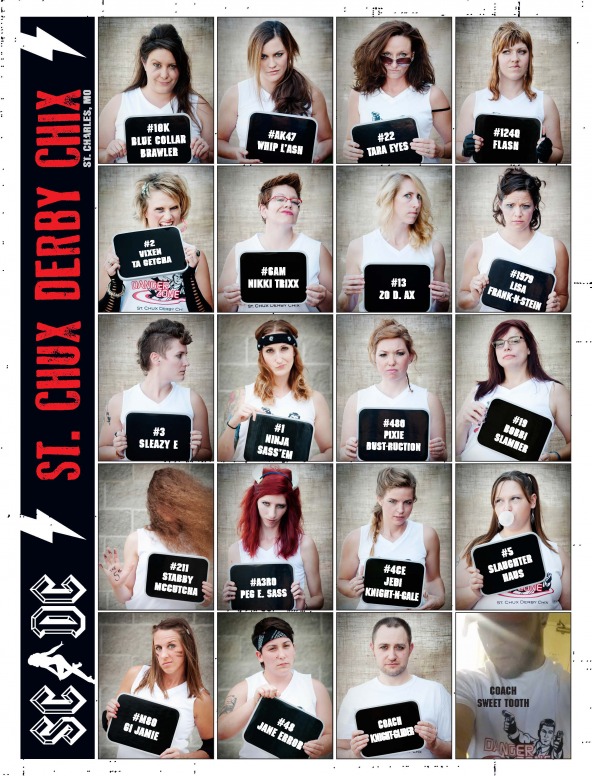 Based In: O’Fallon, Missouri, USA

Who is your team captain this year?

Whip L'Ash is the Captain of Pack in Black. She is, in the words of Tony Muse who has sponsored her via RD Elite, "the most cerebral player on the floor, she leads by doing.” Whip runs 1 practice a week and encourages skaters to participate in off-skates training at The Fighter's Guild, which runs strength, agility and endurance sessions specifically for St. Chux.

We brought in Stabby McCutcha at the beginning of the season who formerly played with the D1 Arch Rival Rollergirls. She has made a fantastic impact on our blocking rotation and is really a stand-out player. Sleazy E and Nikki Trixx also recently transferred from Arch Rival but haven't seen chartered play with us yet this year and will make their debuts in Duluth. Big Red has come back from a 9 month injury after not seeing any sanctioned play since 2013. There have been other injuries to players this season that have kept them from playing a game or two, but nothing season-ending.

We designed and hosted our own "D2" sanctioned tournament called Skate to Thrill in April. We invited 10 teams down to each play three games over the weekend and the games were close and exciting and everyone came out of it super pumped about D2 action.

Does your league have a motto, or words that it lives by?

It started as a total joke during a drill where we were discussing about the inside and outside most lanes being the "danger zone" for jammers to take those paths. Then we started rocking out to some Kenny Loggins when we did that specific drill during practice and when we had to create a "new" white playoff jersey we totally incorporated the theme.