The last game of Saturday night saw No. 9 seed Suburbia Roller Derby (Yonkers, NY) against No. 10 seed Brandywine Rollergirls (Downingtown, PA) in an intense game that capped off an incredible day of roller derby. 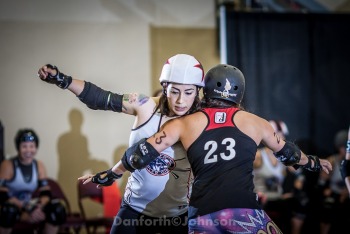 Brandywine won over seed No. 7, Omaha Rollergirls in their first tough game of the tournament (198-144) on Friday morning. They moved on to play the No. 2 seed Detroit in a grueling match on Friday night (82-336). The team from Downingtown didn’t bring four of their regular players and had added two new players, but their roster only equaled 11.

Suburbia lost to 8 seed Treasure Valley in a very tight game on Friday night (109-129). They had upset 6 seed Tucson Roller Derby earlier in the day on Saturday (159-206). You might have thought that fatigue would have affected Suburbia’s play during this game, but the skaters from Yonkers did not look the least bit tired.

The first period started with double trips to the penalty box by Brandywine’s Skinny Guinea (#9) on a track cut and a back block. Suburbia’s Lauren Forcer (#50) took full advantage of the power jams and collected 19 points. It seemed as if Suburbia was going to charge ahead.

But Brandywine’s defense kicked into gear and was able to hold tight to Suburbia’s jammers and then, shortly into the first period, Skinny Guinea made up for her box trips with an 18-point jam and brought the score to 30-24 (Suburbia lead).

Brandywine caught the whiff of lead change and then jammer Buenas D. A$$ took three back-to-back penalties over two consecutive jams and Suburbia’s Veloce Villan (#84) and Lauren Forcer mashed down the gas pedal and never let up. When the dust settled on the penalties the score was 68-34.

Brandywine pulled themselves together and kept their skaters on the track (instead of sitting in the box) and held Suburbia scoreless for the next six jams and chipped away at Suburbia’s lead.

The last jam of the period started with nine seconds on the period clock. Suburbia had called an official review and squeezed in one last jam. But it didn’t go in their favor. Skinny Guinea grabbed lead and four points. At the half Brandywine had pulled close: 82-79.

When Brandywine was full strength and had a jammer on the track, they showed everyone how they upset Omaha and put up a fight against Detroit. But as soon as they lost blockers, or their jammer to the box, they struggled to hold together their defense or mount any coordinated offense.

Brandywine lost three players to foul outs by the end of the game, one left the track with 5:30 minutes left in the bout. Two of Suburbia’s players fouled out. But Brandywine had 54 penalties compared to Suburbia’s 37. Of those 54 penalties, 13 of them were served by jammers. Suburbia’s jammers only served 6 penalties.

During the second period the penalty stress was clearly weighing on Brandywine. With only 11 skaters to begin the game, they ended it with eight. Suburbia’s jammers were able to easily lap the pack in several jams and they pulled further and further ahead. In the second period, Suburbia scored 183 points to Brandywine’s 73.

Suburbia moves on to play for 5th Place on Sunday and Brandywine will play for 7th Place.