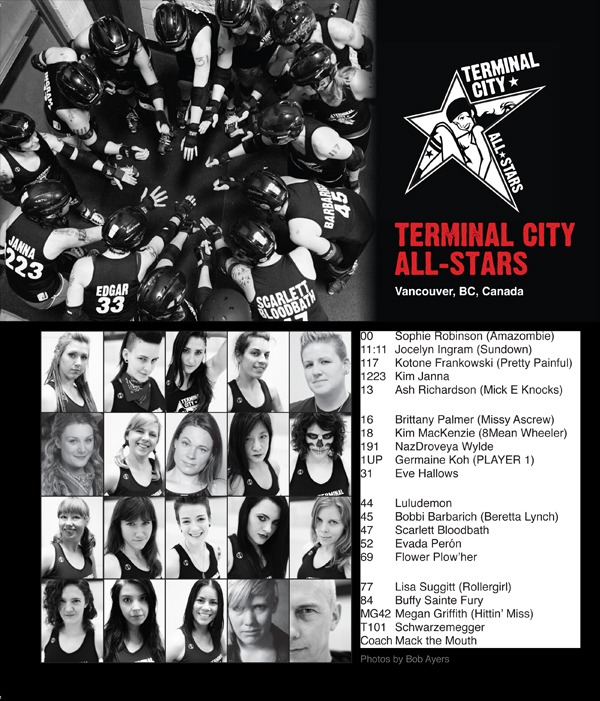 Based In: Vancouver, British Columbia, Canada

Previous Playoff and Championship Appearances: This is Terminal City’s first appearance at a WFTDA Playoffs.

Do you have a mascot? If so, what's its name? And will the mascot be with you at Playoffs? There have been sightings of "Sammy the Salmon" at the Wild West Showdown and the Big O this year....so be on the lookout for a large pacific northwest salmon in Virginia.

Does your league have a motto, or words that it lives by? What is it / what are they? What does it mean to your league?
TCRG 2...0...1...3 has been our motto, cheer, chant, and mantra all season. This year (2013) has been our year to take the momentum and things we learned in 2012 and push ourselves into a playoff spot. We are playing teams that have no idea who we are and how we play, that's great spot to be in when you're the dark horse/underdog.

What was the turning point for your league to make it to a playoff this season? Was there a BIG WIN that pushed your team over the edge?
The turning point actually started last season when the team collectively committed to raising the bar on fitness, teamwork, and trust. It was very evident in the Big O 2012 when we swept all our games and culminated in a California road trip that had us take wins in Santa Cruz and Silicon Valley. This in turn, propelled our standings in the West to 12th, narrowly missing a first-ever trip to the region playoffs. In 2013, the team committed to wanting more and started off the year in February with a last jam, 1-point victory over Jet City. That was the catalyst to continue to improve and push harder to make sure we were in a top-40 spot come July.....and here we are!