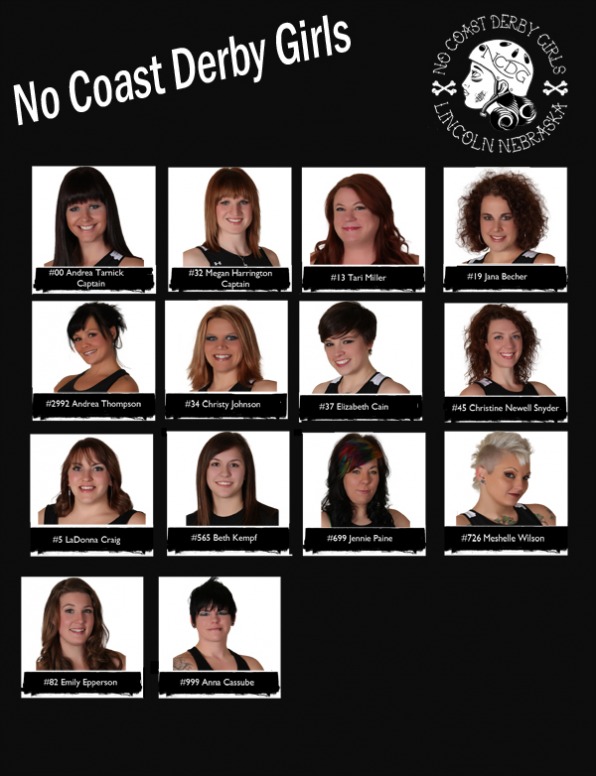 Based In: Lincoln, Nebraska, United States

Does your league have a motto, or words that it lives by?
We have called ourselves the "Wolfpack" since we went to Sacramento back in 2007. Wolves are social animals that hunt in packs, cooperating allows them to bring down larger prey. It's a really great parallel to a roller derby team and that's why we love it. No Coast is the small town on the block, so we're always going up against bigger cities and taking down bigger prey. We're the dark horse out there - underrated and unassuming. We don't mind it, but we certainly are ready to make a big statement in Richmond this year.

Do you have any special cheers for any of your skaters?
Yes we do! This year we introduced Max the Wolf to No Coast Nation and the fans love her/him! Max may be making an appearance in Richmond, you just never know where she/he will be!

We have lots of great cheers that have now become staples for fans in the arena on bout night. The announcers will call out and the fans will respond thunderously:
Whose House? Our House!
No Coast! No Mercy!

Those are two fan favorites!

We have some others that we get pumped up to in the tunnel before team intros:
What time is it?!?! Game time, huh!

What are some game highlights from your travel team season this year?
We beat the then #13 team, Arch Rival, in a 3-point win at home in late March. That was a great motivator for us to push ourselves hard bout after bout. The crowd was just tremendous that night at Perhsing Center and we could barely hear the whistles being blown in those final minutes of play. As a skater, you just live for those moments and you really find out who the play makers are in those critical points. Our team really came together that night and just synched up - it felt good and we have just been feeding off of that ever since.