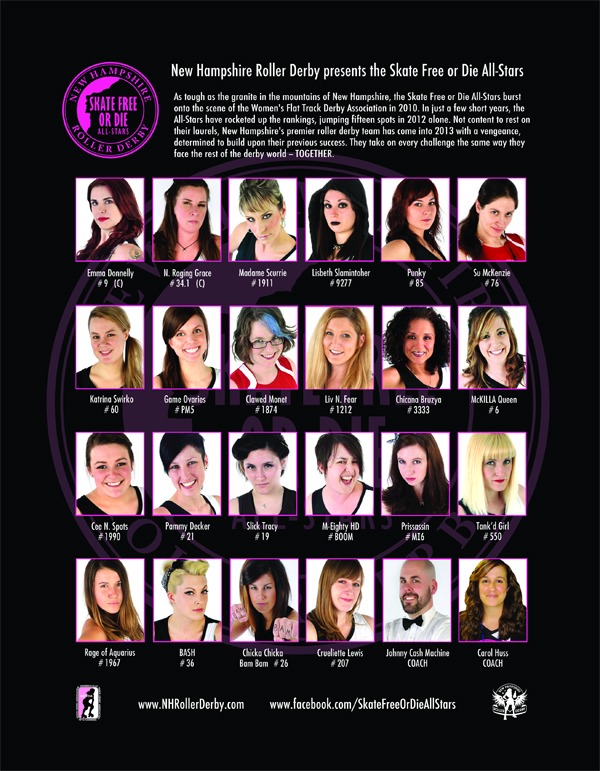 Previous Playoff and Championship Appearances:Skate Free or Die (SFOD) is proud to be skating in their very first WFTDA playoff tournament.

Does your league have a motto, or words that it lives by? What is it / what are they? What does it mean to your league? Actually The Skate Free or Die All-Stars team has lived, skated, and breathed by the mantra "Hustle. Hit. Never quit. TOGETHER!" since the beginning of the 2012 season. It reminds each skater of the important components of play, as well as the foundation of the team strategy, that they do it TOGETHER. Each team member has a crucial role in the success of the whole. Skaters rise to the occasion and support the team when needed, thinking of what is best for the team in every action. The team had some injuries in the last 12 months and both jammers and blockers have stepped up to fill in the gaps, sometimes even mid-game. SFOD is also approaching this tournament with that same mentality with almost every member, rostered or not, travelling TOGETHER. Hustle, Hit, Never Quit, TOURNAMENT! TOGETHER!

Do you have any special cheers for any of your skaters?
Swirko: Hi-ho, Swirko!, Swirk-it!
Liv N. Fear: Honey badger don't care!
Game Ovaries: Ovie-ovie-o!!!

Has your league experienced any retirements, transfers or injuries in the past year that have made a substantial difference in your league’s play and performance?
In the 2013 season, SFOD welcomed transfers Katrina Swirko and Punky from the now-defunct Roller Derby Manchester (NH), as well as Rage of Aquarius from the Rock Coast Rollers (ME). All three have proved invaluable in filling out the hole left in the team's jammer rotation by the early-season injury of 2010 rookie Madame Scurrie. Scurrie was joined on the injury list by 2011 rookie, skilled blocker/pivot M-Eighty HD (a.k.a. Boom) for the entire season with the exception of the team's March bouts against both Steel City's Steel Hurtin' (PA) and NEO Roller Derby (OH). Skaters Tank’d Girl, an original founding member of NHRD, as well as captain Emma Donnelly (formerly Harlot Fevah) will be retiring from skating after this season.