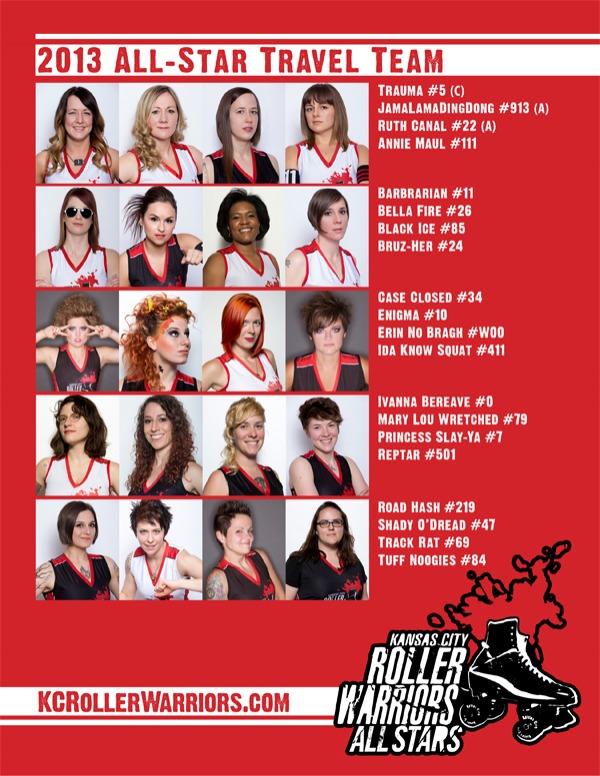 Does your league have a motto, or words that it lives by?
We call ourselves the Wolfpack. It's not an official name, but we donned it a few years ago and it stuck. We think it's fitting, because we're a little family who hunts together ("the pack who preys together, stays together"). Our announcer, D'nouncer Duane Cunningham, designed a wolf decal for our helmets last year, and they look pretty neat. Everyone is always coming up with funny new theme variations and mottos, such as one of our 'whoa bundy' cheers: "Circus Wolves: IN TENTS!".

How have your practices changed since being named one of the teams to make it to the 2013 Playoffs?
The tournament seeding announcement happened just as our home team season was ending, so we've been able to be completely dedicated to the All Star team. Our practices have been a challenge this season, as we started the year off with moving into our new dedicated practice space (Warrior Alley, nicknamed "Walley") later than expected. After only a few short months in the new space, we had an electrical fire that currently has us temporarily displaced until the building can be cleaned and restored. Local rinks have been gracious enough to provide us some time at their venues, but it does make the season a little more challenging.

Has your league experienced any retirements, transfers or injuries in the past year that have made a substantial difference in your league’s play and performance?
We're heading into this tournament without Evolution, but we've picked up Tuff Noogies, Case Closed, and Track Rat out of retirement. We've also just welcomed Princess Slay-ya back to the team, who has previously been skating with Mid Iowa and Team United.