The battle for 9th Place in the 2013 WFTDA Division 1 Playoffs Asheville started off with a back and forth point struggle, but the Columbia Quad Squad, of Columbia, South Carolina, soon found themselves in extreme penalty trouble as the Mad Rollin’ Dolls of Madison, Wisconsin, racked up the points.

The first jam opened up with a power jam for Columbia Quad Squad. Columbia’s Poison Violet picked up lead jammer and Madison’s Mouse was called for a track cut. The jam ended 0-15 in Columbia’s favor. The very next jam, Mel Anoma picked up lead and points, but waited too long to call the jam and Mouse escaped from the box with 3-2 jam, making the score 3-17. Magic Missile picked up enough points to tie the game at 17 while the Madison pack held Mal Pacino. Ladie Who-ha took back the lead for Madison 21-17. 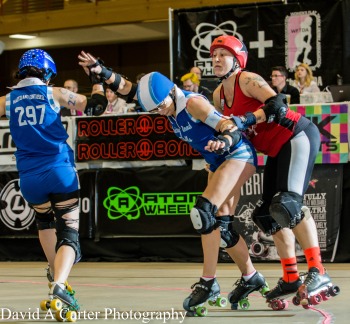 Poison Violet then tied the game at 21 with 23:42 left in the first half. Mal Pacino added to that, putting Columbia on top 21-24 as the pack sped around the track. Mel Anoma had a hard time getting through while Magic Missile picked up 8 points. Madison took the lead back, 29-24. Madison picked up their first power jam when Poison Violet was sent to the box for a high block, as Hazed and Contused was already scoring points and had lead jammer status for Madison. Columbia filled the penalty box with 2 blockers and their jammer with a blocker in the queue. Columbia called a timeout to regroup.

Soon after, Mel Anoma tried an apex jump, failed, and was called for a penalty, allowing Ladie Who-ha to rack up points for Madison on a power jam with 2 Columbia blockers and the jammer in the box. Ladie Who-ha picked up a skating out of bounds penalty. At the jam’s conclusion it was 78-42, just over halfway through the first period.

Poison Violet picked up 6 points on the power jam. But Mouse returned on the next jam and picked apart a scattered Columbia defense for 103-48.

Sequin Destroyher vs. Mel Anoma match point for point for a 121-63 score with 3:12 left in the first half. Chucktown Bruiser, once again jamming for Columbia, cut the track and gave Magic Missile yet another power jam. Madison was able to add 5 more points before halftime with the score 150-63.

Columbia started the second half off strong, winning a series of jams. Mel Anoma picked up lead jam and 4 points and Poison Violet continued the upward trend by picking up another lead jam and 4 more points. CQS started to come back with 150-71. But Ladie Who-ha spoiled the comeback, by picking up lead jammer status and 9 points for Madison making it 159-71, just over 26 minutes left.

Barney Rebel took the jammer hat for the first time, got lead for CQS but was unable to capitalize.

Poison Violet hit the Madison jammer out and recycled her 20 feet behind the pack and then apex jumped her way to lead jam. However, when she came around for points, the Madison defense forced her to cut the track when she tried to come around the outside. Sequin Destroyher had another Madsion power jam, bringing their lead to 100 points.

The penalties continued to pile up for Columbia. Poison Violet took another trip to the box as the CQS jammer on a misconduct call when she tried to jump the apex.

Columbia had one last push to put points on the board. They executed a series of successful jams despite a rotating blockers in the penalty box, making it 215-110 with 8:57 left. But Madison found some momentum of their own and upped their score to 232-110.

“Today’s game was exhilarating,” said Madison’s Hello Sailor. “There is certainly something about winning and getting points, but I think reaching your full potential as a team is what’s most important. And today was a day that we achieved that.”

Columbia’s Boston Terror, Holly Hunter and Sexual Chocolate all fouled out in quick succession toward the end of the game for CQS. The penalties proved too much to overcome for CQS, with 47 penalty minutes to Madison’s 26. Madison won the game 265-125.

“I wanted to thank everyone for the opportunity to come this weekend. We learned a lot,” said Columbia blocker Truckstop. “All the teams we played were very classy. We’re going to be taking a lot home from this experience. We play Atlanta next month and playing these three games was great preparation for that.”