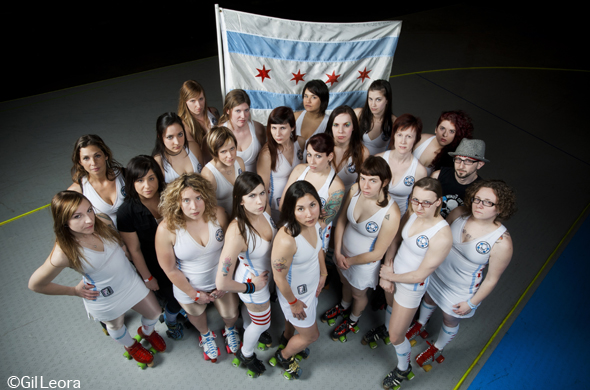 Based in: Chicago, Illinois

Have there been any notable roster changes since your last Playoffs appearance?
No retirements however we did get Moby Nipps from Milwaukee and brought up a new rookie, Phoebe Fi Fo Fum, who will be a great jammer to watch on the track.

What are some game highlights from your travel team season?
Almost beating Denver and gaining vengeance for 2009 Championships in Philly!

What's one super special thing about your league that makes skaters stay with your league? Our league is one giant supportive family. From our support staff to fellow skaters we could never live without one another. We always have to watch out for Grandma Hoosier who enjoys pinching rosy cheeks.

What's your crowd like at home?
Chicago fans are the best fans in the Universe. The fans are prepped for derby cheering after spending years rooting for other Championship teams like the Blackhawks, Bulls, Sky, Fire, Bears, Sox, and of course the Cubs.

Who is the All Stars’ biggest rival?
Gotham, we even created our own skyline cup trophy to use when we play against them. Currently the WCR All-Star team has never won against GGRD; however in 2011 the WCR B team (many of whom are now All Stars) beat the GGRD B team and broke the Gotham winning streak.