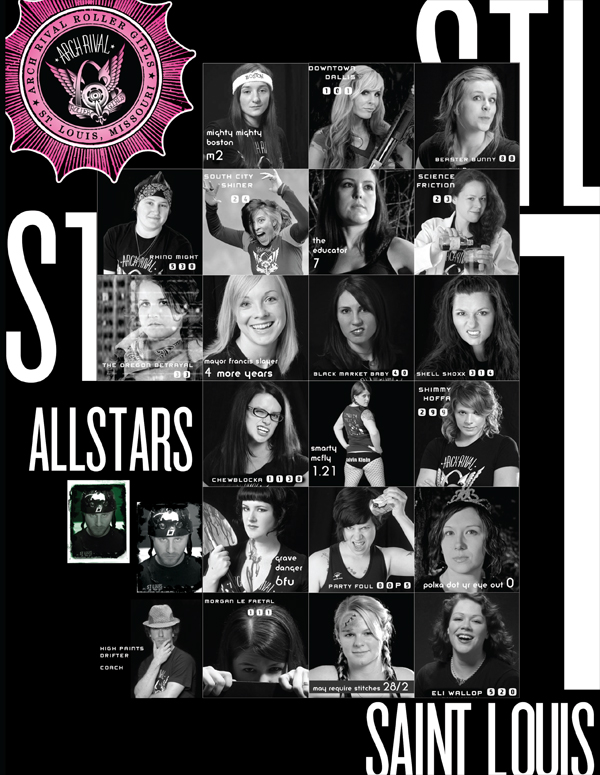 Based In: St. Louis, Missouri

Have there been any notable roster changes since your last Playoffs appearance?
We have lost three key players from our 2011 Playoffs roster: Stabby McCutcha, Artemischief and Smarty McFly. Stabby retired this season to pursue grad school. Artemischief moved with her husband to Austin, Texas, and is now skating for the Texas Roller Girls! And Smarty McFly is currently on our injured reserve while she recovers from ACL reconstructive surgery.

Who's the All Stars’ biggest rival?
It would have to be the Ohio Roller Girls. After trading wins and losses last season, the Chicago Outfit is a prime candidate. But Ohio has turned out to be a tough opponent. They came out with the win when we played this past April/May and we are looking to erase that loss from our record when we meet again at Playoffs.

What are some game highlights from your 2012 season?
Our upset over Detroit at this year’s Brewhaha tournament is a highlight of our season. We felt like we finally captured the attention of the national derby world and legitimized our team’s progress.

Is there a fun fact about your coaching staff that you'd like to share?
Both of our coaches, Magnum, P.I.M.P. and High Pains Drifter, skate for the STL GateKeepers men’s roller derby league. They both have very healthy beards and love playing Big Buck Hunter at the bar across the street from our practice venue.