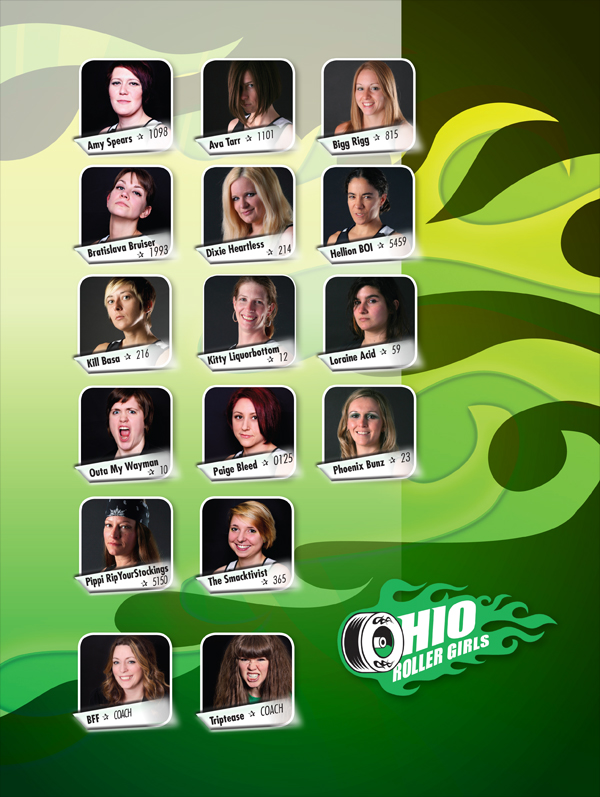 Based In: Columbus, Ohio

What's one little-known fact about the Ohio Roller Girls?
It’s probably not so little-known now, but OHRG is small – both in physical size, and numbers-wise. We think that is actually an advantage for us, but a lot of times opponents are really surprised by both these things. We’ve played with as few as 11 on a game day roster before.

Have there been any notable roster changes since your last Playoffs appearance?
We had a small number of retirements and injuries since last year’s playoffs, so most of our roster has been here before. We have one true rookie in The Smacktivist, who will be making her first Playoffs appearance.

What is the All Stars’ most memorable derby moment?
Probably our win over Brewcity at Brew Ha Ha this year. We all anticipated a really close game, our go-to jammer Kitty Liquorbottom broke her hand early on in the match and had to sit the bench, and we’d never won over them before. So none of us really believed that we were winning by as much as we were until the final whistle blew. And even then, a few of us were still in disbelief.

What's the most interesting thing about your home city?
Columbus is underestimated as a city. We’ve gotten a lot of national travel press in recent months about the burgeoning food and music scenes, and most people who visit are pleasantly surprised by how metropolitan the city is. That “underestimated” moniker could probably apply to OHRG’s early season this year as well.

Who should we watch out for on the track during your appearance at the 2012 Playoffs and why?
We pride ourselves on teamwork, and working together so no one stands out. That said, Phoenix Bunz was named MVP of May’s Brew Ha Ha event for a reason: she’s agile, explosive, and really hard to contain; plus, she plays all positions. We also worked at getting our players comfortable in different roles over the last year, so you’ll see us jam lots more players who have traditionally been blockers as well, namely captain Bratislava Bruiser, Pippi RipYourStockings and Loraine Acid.