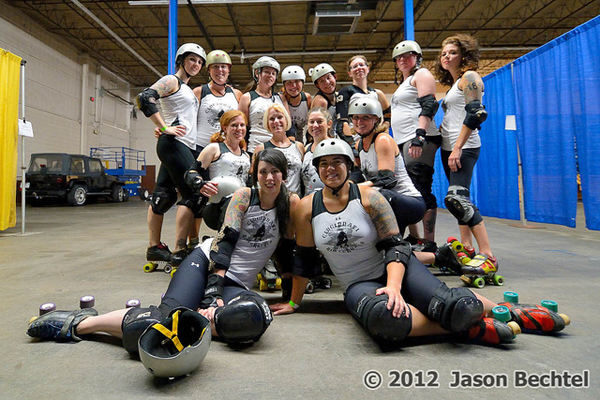 Based In: Cincinnati, Ohio

What's one little-known fact about the Black Sheep?
Since August 2007, Cincinnati's Black Sheep have played 81 WFTDA games, making them one of the most experienced teams in the WFTDA. June with a Cleaver is the only player to have played in every single one of them.

Do you have any memorable experiences from your past Playoffs trips that you want to share?
This will be CRG’s fifth trip to a regional playoff tournament, and they’ve all been memorable in their own ways. We placed fourth in 2009 and 2010, just one spot away from going to the Championships, and we still intend to make it there someday.

Who should we watch out for on the track during your appearance at the 2012 Playoffs and why?
Jammer K. Lethal is always one to watch. Just this season, she’s scored more than 100 points per game in three games. In the pack, Buckhead Betty has been bringing the pain this season with her killer booty blocks.

What are some game highlights from your 2012 season?
Our upset win over the Chicago Outfit at Brewhaha, 136-119 (although yes, they beat us two months later); our narrow 150-143 win over Tampa, which was arguably our most exciting and crowd-pleasing game at the Gardens this season; and our decisive 212-107 win over the Black-n-Bluegrass Rollergirls (a new WFTDA team located just across the Ohio River from Cincinnati in Northern Kentucky) in the first-ever Crosstown Knockdown.

What's the most interesting thing about Cincinnati?
Where do we begin? People most often associate Cincinnati with “WKRP in Cincinnati”; our famous former mayor, Jerry Springer; our unique chili that only Cincinnatians seem to love (it’s chili on spaghetti with mounds of cheddar cheese) and being a huge sports town (the Reds were the first professional baseball franchise). But people might not know that we’re in the midst of a huge urban renaissance. Cincinnati is seeing incredible amounts of new restaurants, bars, office buildings and parks appearing our riverfront, in our downtown and in a historic, architecturally stunning neighborhood called Over-the-Rhine just north of downtown, which has even been written about in the New York Times. We’re also rediscovering our rich brewing heritage with revived historic breweries and brand-new ones. Fun fact: In the late 1800s, Cincinnatians drank more beer per capita than any other city in the country – 40 gallons vs. the national average of 16! Fun fact No. 2: Sam Adams has a brewery in Cincinnati that cranks out more than 700,000 barrels of beer a year (Sam Adams founder Jim Koch is a Cincinnati native).