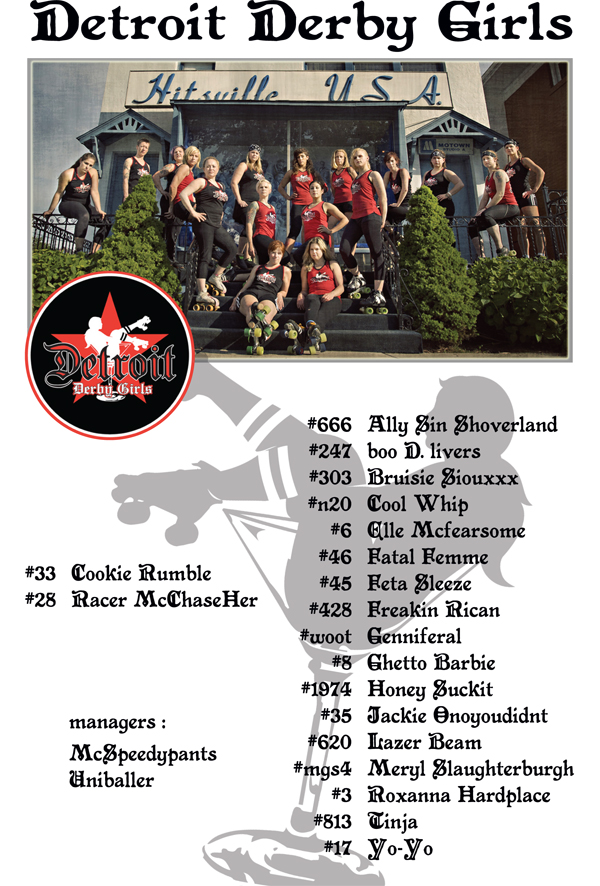 Based In: Detroit, Michigan

Who should we watch out for on the track during your appearance at the 2012 Playoffs and why?
You should keep your eyes peeled for all the new talent that Detroit has brought onto the team this year. Only half of our vets from last season returned this year and include: Captain Cookie Rumble, Assistant Captain Racer McChaseHer, boo D. livers, Bruisie Siouxxx, Cool Whip, Elle McFearsome, Fatal Femme, Freakin Rican (out on injury), Honey Suckit, Lazer Beam, and Tinja. New to the team this year are Ally Sin Shoverland, Doom Shakalaka, Feta Sleeze, Genniferal, Meli Ali, Meryl Slaughterburgh, and YoYo. And returning to the team after a season off are Ghetto Barbie, Jackie O. Noyoudidn’t, Mexi-Go, Roxanna Hardplace, and Spanish Ass’assin.

What's your crowd like at home?
We have die-hard home team fans! We also have a few dedicated and devoted all-time fans that travel all around the country to watch us play. Two of them (the parents of Elle McFearsome and Cookie Rumble) drove over 26 hours round-trip to watch the travel team play in Lincoln, Nebraska! We pride ourselves on having a family-friendly atmosphere so we get a lot of families with kids. Our league plays at the Masonic Temple in downtown Detroit, which holds approximately 1,000 people. The largest crowd we ever had was at Cobo Arena where we played our 2010 (intraleague) Championships in front of 3,001 fans.

What is the All Stars’ most memorable derby moment?
The bout against Boston at Heartland Havoc (2007 Eastern Regionals). It came down to an overtime jam and our jammer started the jam in the penalty box. The blockers managed to hold back Boston’s jammer long enough for our jammer to be let out and score the winning points in “The Final Countdown.” Our teammate, Racer McChaseHer, was named MVP of that tournament.

Who is the All Stars’ biggest rival?
Likely Naptown and Minnesota since those were the 2 teams that most recently knocked Detroit out of contention for Championsips in the past 2 years. Coincidentally, Naptown is the first team Detroit faces at Thrill of the Spill, and the winner of that bout moves on to play Minnesota.

Is there a fun fact about your coaching staff that you'd like to share?
One of our coaches (Speedy) is a world-class speed skater.